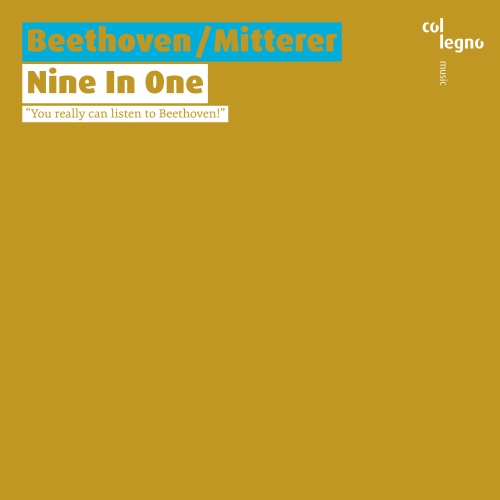 Wolfgang Mitterer assembled the Nine In One (COL LEGNO WWE 1CD 20439) record by compressing pretty much all the Beethoven symphonies (or their major themes, at any rate) into a single one-hour listening experience. In appreciation of this effort, the record is credited to Beethoven / Mitterer. I think one single set of recordings – by the Haydn Orchestra, conducted by Gustav Kuhn – was the source for this ambitious work; it so happens that this same label (Col Legno) released this as a 5 CD set in 2007, so presumably any licensing issues for this artistic statement were facilitated by this arrangement.

Besides doing the compression / editing / rearranging, Mitterer has also added electronic elements, thus introducing a more contemporary dimension to the finished item. Wolfgang Mitterer is a serious composer, keyboard player, student of electro-acoustic music who studied in Vienna and Stockholm, and is widely regarded as an expert in electronic music among his fellow Austrians. No denying the seriousness of his ideas and intent, nor the thoroughness of his craft, but much of Nine Of One fails to catch fire for me. I blame myself, for not being at all familiar with this important canon of classical work; it means I can’t tell where the joins and elisions are falling, thus can’t really appreciate what makes this such a radical statement. True, one recognises certain famous phrases and themes which emerge from time to time, but they only highlight for me the general incoherence of this record. I mean it’s full of frustrations, thwarted moments, where one’s conditioned responses to the crescendos and climaxes of classical music structure are consistently denied and disappointed.

Presumably this is the entire point of the record. But to my mind Mitterer doesn’t really go far enough; it’s as though he’s a shade too respectful to the original source, and doesn’t really care to commit outright vandalism, cutting a huge swathe of Dadaist chaos through this body of work. A corpus which some might regard as the epitome of bourgeois academic conservatism. Instead, polite re-ordering is the mode of the day. And yet it’s sold to us as a “roller-coaster ride”, in a press release promising a lot more in the way of excitement, danger, and shocks. Well, let me for one moment refer you to Stockhausen’s Opus 1970, sometimes known as Stockhoven-Beethausen, a masterful deconstruction of Beethoven’s music which was more interesting to listen to, more subversive, and a lot more fun than this. From 3rd July 2018.