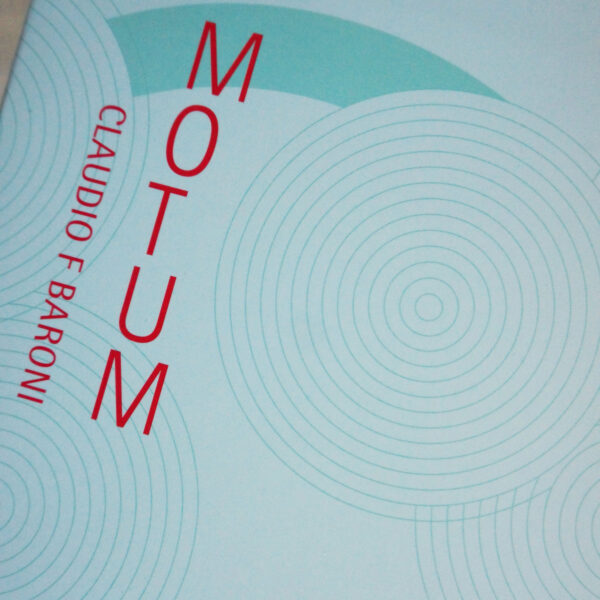 Motum is a showcase for the Argentinian new composer Claudio F Baroni, previously appearing on a sampler from this label (UNSOUNDS) in 2013. This particular Motum (UNSOUNDS 61U) item coincided with the Maze Festival in May 2018 and was handed out free to visitors.

There are three new works on offer. The first, ‘in CirCles II’ is the longest, spread out over four movements; the Ensemble Modelo62 play keyboards, cello, percussion and electric guitar in this updated form of chamber music. Beautiful and lucid music results; has a stasis that is extremely centred and calming; and plays with notions of space and time ingeniously. Not far apart from Morton Feldman, though not as deep; Baroni has the forms, though perhaps not the same sense of rigour. I admire the way the quartet exhibit considerable restraint, and the combined effect of the instruments keeps making me hear a vibraphone where there isn’t one.

‘SoLo VIII-Air’ is dedicated to another minimalist composer, Phill Niblock, and is performed on the organ. The emphasis here is on silence, rather than separate musical notes; the intention seems to have been to create a single blob of sound, then manipulate it using the manuals, stops and switches that were available at Het Orgelpark. (The French composer and improviser Jean-Luc Guionnet is another who approaches the formidable array of keys on an organ as if it were a mixing desk.) In the case of the ‘Air’ solo, it took two of them to do it – Claudio and Ezequiel Menalled, in pursuit of the “fluctuating sonority” that he craved. I love the sound of the organ, so I’m mostly won over; like the grandiose shapes and approaching black clouds, just not feeling enough menace or solidity in this groaning ectoplasm.

The last work ‘Perpetuo Motum’ promises “massive panoramic vistas”, and press notes invite us to hear affinities with Xenakis. Anyone who dares the Xenakis comparison faces hubris, but these are unlikely to be the composer’s own sentiments. The Quartetto Prometeo string quartet, recorded in Italy, work their way through slightly turgid exercises, moving up and down a scale with the “glissando” effect. I appreciate there’s an interest in maintaining poise and equilibrium to keep the essential tension intact, but somewhere there’s a lack of engagement; the players seem slightly bored with the chore, or haven’t been made aware of what important issues might be at stake in the mind of the composer. From 3rd July 2018.