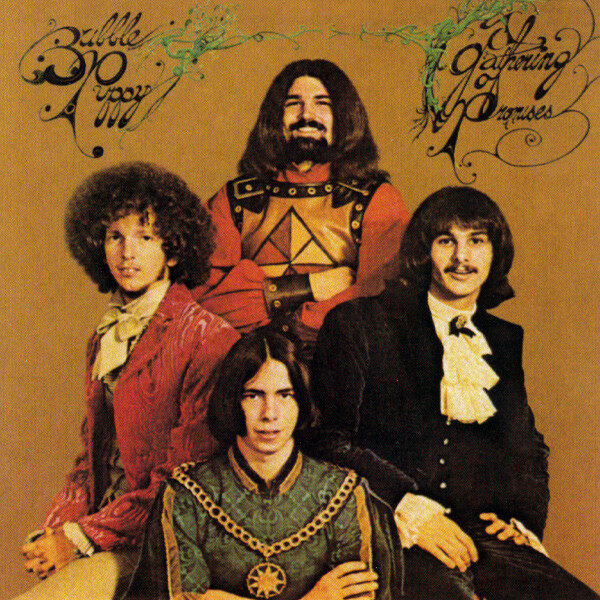 Awww – how could you not love a band called Bubble Puppy??? Especially when the band photo for the cover of debut album “A Gathering of Promises” features the guys in a mix of outlandishly foppish 18th-century suits and stage-wear for a space opera musical? These brave Texans got together under their adorable project name in 1966 and released their first album in 1969. The guys switched to another record label but had to drop the Bubble Puppy name partly to avoid legal issues with the previous label and partly to distance themselves from the bubblegum pop music for pre-teens starting to come to the fore. As Demian, the quartet recorded a second album, also self-titled, but sales were not good and the financially strapped band broke up in 1972.

The first song “Hot Smoke and Sasafrass” is the strongest and most distinctive track on the album with thunderous drumming, lively and energetic dual guitars and dual vocals. After this song, the musicians settle on a slightly more sedate trajectory with sparkling and even fast shredding lead guitar work from lead guitarists Rod Prince and Todd Potter, with the occasional burst of nuclear-powered percussion from David Fore. All four band members sing in harmony on all four songs, though they end up sounding a little like the Beach Boys on an unlikely evangelising mission for a straitlaced church. The result is a surprisingly heavy and powerful rock-out style with a contrasting restrained folk pop bent: not quite what you’d expect of a psychedelic rock band. Some of the music could even be considered proto-thrash, it really is that fast.

While the songs are quite poppy, they seem to have a slightly melancholy mood and the lyrics can be reflective, a little worldly wise and hopeful. Even so, the melodies on a number of tracks are very infectious, with one track “Elizabeth” even having a klezmer or Middle Eastern-sounding riff that’s sure to puff up a few hookah clouds out of the speakers. After this track, the band treads water with the next couple of songs but comes steaming back with last song “Beginning”, the guitars and drums jamming for all they’re worth.

For all their considerable and versatile musical talents and songwriting ability, these guys unfortunately fell afoul of the grinding demands of the commercial music industry and their music, individual and innovative as it was, was probably just a bit ahead of its time. The notions of dual and duelling lead guitars, and of combining vocal harmonies, elements of psychedelic music, prog rock and proto-heavy rock are legacies Bubble Puppy left, that were taken up by other bands after them. For these reasons, “A Gathering of Promises” is highly recommended.