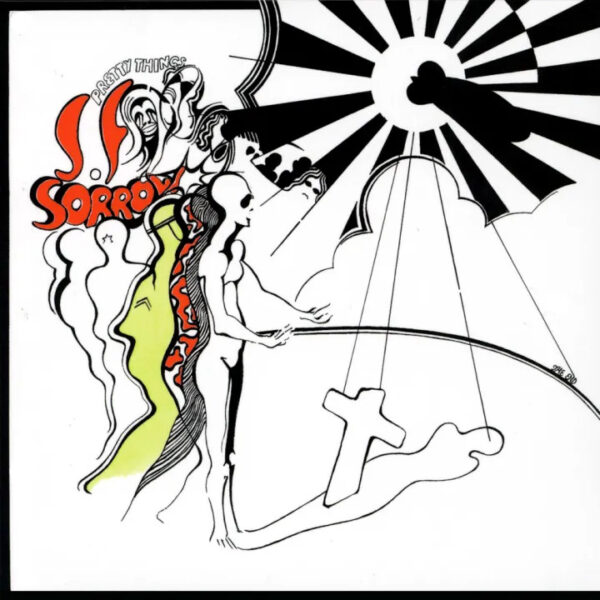 In case people haven’t already noticed, I have been on a Sixties / Seventies psychedelia nostalgia binge finding some of the most obscure and underrated recordings a TSP terrier can sniff out so it was only a matter of time before I snuffled this classic British psych-rock gem from under a mushroom forest so I myself could place it among the champignons of rock. (Oh all right, actually I’ve known this album since I was a kid way back 40 years ago when a Sydney radio station played it in its entirety late one evening.) There is probably not much I can say about “S.F. Sorrow” that has not already been said by a thousand and one critics, good and bad, except to queue up behind everyone else with an opinion and the mouth to match to pronounce that this is one of those albums you must hear at least once in your life before you can say you’re a well-rounded music fan. The work is very much a creature of its time, a historical document in its own right along with a number of other more famous albums sharing in its musical genres and having a similar storytelling structure released in the late 1960s.

As most TSP readers probably already know, “S.F. Sorrow” tells the life of the titular ordinary every-man character born perhaps about the dawn of the 20th century to a working-class couple in a typically generic British industrial town. On the first side of the album, S F Sorrow enjoys an idyllic but brief childhood before eventually he is fed into the maw of early modern capitalist industrial factory life. An early romance with the girl next door is interrupted by Sorrow’s conscription into the British army. He is soon thrown into the thick of battle and violence, and is witness to horrific events that claim the lives of comrades and his own mental health. Fleeing Britain after the war, Sorrow winds up in New York and waits for his fiancée but Fate snatches her away in a fiery airship accident. From this moment on, Sorrow deteriorates physically and mentally as the stresses of life continue to hammer and grind him into the dust and he takes solace in various nostrums (including odd psychedelic trips into his inner space) to escape his pain and alienation.

Generally the album’s music is not very different from recordings like The Beatles’ “Sergeant Pepper’s Lonely Heart Club Band”, Pink Floyd’s “A Saucerful of Secrets” and other work made by folks who jumped onto the bandwagon of making concept albums with eclectic musical choices. The album’s music is astonishing in its variety, taking in commercial pop, psychedelic rock, music hall influences, dance beats, garage rock, folk music and more besides, all topped off by the band’s characteristic vocal harmonies; singer Phil May’s vocal range and intelligent, evocative lyrics; the guitars’ gritty sound; and experimentation with rhythms, beats and mood and ambience changes. (Of course this leads to the situation where the album does not have a distinct music identity and ends up sounding like a lot of other bands’ recordings of the same period.) As the narrative descends into darker emotional and psychological territory, the jaunty songs take on a more sombre edge beneath the catchy tunes and bouncy beats. Indeed, the most sparkling and lively music may be accompanied by the most depressive lyrics and sinister atmospheres.

For many listeners, the downward trajectory of both narrative and music into sadder and depressive territory will make the album an uneven listening experience with earlier songs perhaps being more enjoyable than songs in the second half of the recording. Tracks from “S.F. Sorrow is born” to “Balloon Burning” are early highlights, each in its own way, though for me “Private Sorrow” and “Balloon Burning” are the best early tracks with regard to distinct melodies, the intensity of mood and the musical extremes reached on the latter song. The second half of the album from “Baron Saturday” (a play on the name of Baron Samedi, a Vodun deity) on can be harder going but it’s not without its gems like “Baron Saturday”, the weird little experimental instrumental proto-noise piece “Well of Destiny” and the minimally styled neofolk closer “Loneliest Person”. Curiously the guitar melody that introduces “Old Man Going” bears more than a passing resemblance to the introduction of The Who’s original recording “Pinball Wizard” on that band’s album “Tommy”, a concept work recorded later than “S.F. Sorrow” but released earlier thanks to the bungling of the album’s release schedule in 1968 by the Pretty Things’ record label at the time.

My only major criticism is that this album missed its chance to be a very incisive critique of Western capitalist industrial society and especially its early 20th-century British imperialist manifestation which threw thousands of its young men into two world wars that not only destroyed far too many of them but rendered many more psychological wrecks who ended up ignored and mired in various addictions. But perhaps being so would have made “S.F. Sorrow” even more neglected by the music industry than its eponymous protagonist, to the extent that similar works about the alienation and anomie produced by Western capitalism – works like Pink Floyd’s “The Dark Side of the Moon” – might never have become possible.

On some reissues of the album, bonus tracks are included and these can be interesting in themselves in the way they juxtapose elements from different musical genres to create some innovative fusions (some of which prefigure thrash metal) together with a knowing attitude and that hard, gritty edge.