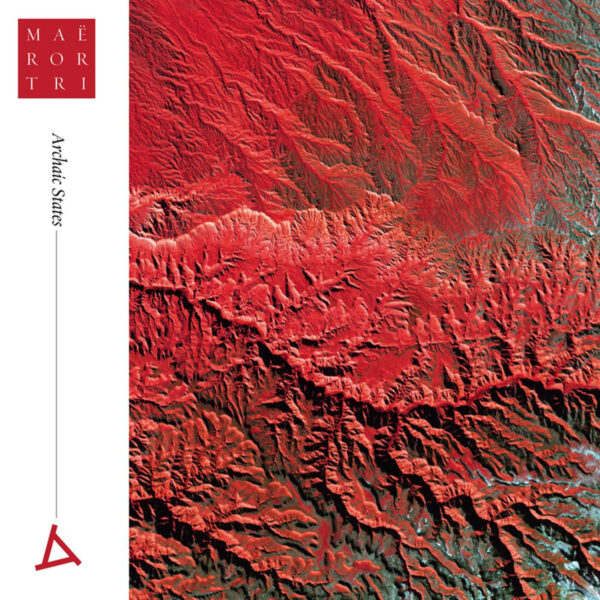 Polish label Zoharum have been managing one or two reissue programmes lately, rescuing music from the history of industrial, drone and avant-techno genres to bring it to a new audience. Recent beneficiaries of this largesse have included Genetic Transmission (very extreme gloomy industrial grind from Poland) and Hybryds (ritual-loving dance-beats from Belgium), though when I say “history” it’s usually only as far back as the 1990s, a period which might be set to emerge as a new “golden age” of music to some listeners. Today I learn that Maeror Tri, the German trio who created impressive drone-scapes with treated electric guitars, are seeing some of their earlier releases back in print. Specifically, it’s their 1990s cassettes that Zoharum are interested in; I imagine this move will please a lot of collectors, as prices of the originals (assuming you can even find them) are pretty teeth-clenching. In our hands today we have Archaic States, and Ultimate Time – from 1993 and 1994 respectively.

Archaic States (ZOHAR 163-2) (number 3 in this cassette series) originally came out in Japan on the G.R.O.S.S. label in a very small edition (although ironically, this CD reissue only ups the ante by 100 copies). It’s impressive stuff…we’re advised that cassettes were where Maeror Tri unleashed “much rawer recordings” than on their regular albums, and it’s hard to disagree on the strength of some of these grindhouse specials. The musical approaches on Archaic States are varied – there’s formless, angry noise, there’s heavy-duty factory machinery pounderment, but there’s also lyrical guitar fugues, plus the disquieting ambiguity of ‘The Administrator 2’, a very interesting denatured quiet and wobbly drone that allows us to explore the dark underbelly of an imaginary world. The main event here is the long piece ‘Blowing Sounds From A Dome’, almost a mini-symphony or a John Williams soundtrack to a movie of the damned, so dynamic and profound are its changes. For those with a taste for menacing and expertly constructed noise, check in here…you’ll receive your heart’s desire all right, but be warned that it gets built around you like a suit of armour made of iron, which is then welded in place with hot rivets. Good luck getting out of that. There’s also a bonus cut on the disc, ‘Soliton’, originally issued in 1998 on a CDR. Ultimate Time (ZOHAR 164-2) originally came out on Old Europa Cafe. I suppose it says a lot for the durability of these genres (such as ambient, noise, industrial, and power electronics) that said label is still operating today and thriving under the patronage of its Italian owner. It also appeared on the short-lived label SPH in Portugal. I think all the music – recorded in 1990 and 1991 – was intended for submissions to other comps and labels, all of which rejected the pieces or went out of business before anything could appear. Despite this disparateness, most of the cuts here refer directly to infernal places or states of mind conducive to damnation – ‘Lost Paradise’, ‘A Deeper Hell’, and ‘Middle of the Earth’, and when they’re not doing that they invoke sickened emotions of sorrow and terror. This set feels a shade more ambiguous than its brother above, and most of the music appears as a noise-enriched drone of mighty proportions. On today’s spin, I’m certainly digging the quiet desolation of ‘Middle of the Earth’, which conveys the sensation of being trapped underneath an earthquake which is wreaking havoc 100 miles above us on the surface. There’s also plenty misery and futility encoded in the bones of ‘Droning Souls’, a low-key murmur of almost supreme stasis. If I had to generalise, I’d say this release feels less directly violent than Archaic States, yet the sense of underlying menace never goes away (an abiding trait which adheres to much of this genre, truth be told). Bonus cut is taken from The Art Of Marginal Talent (1997). Both the above from 4th September 2018.