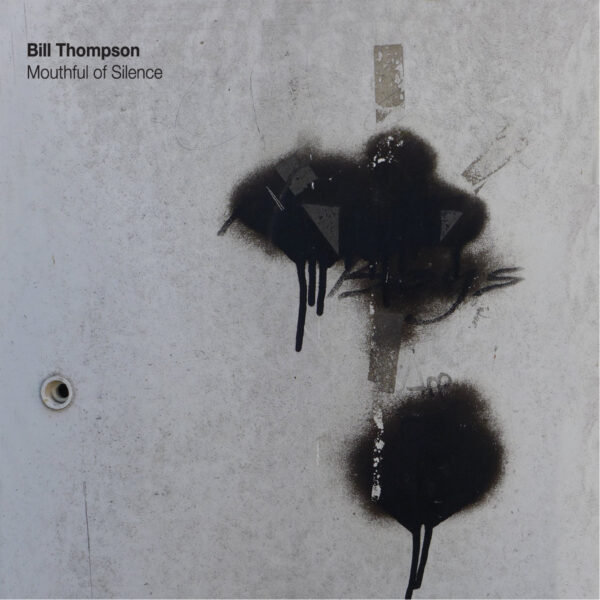 Two CD set of excellent drone music from Bill Thompson, a Texas-born musician who might be living in the UK just now (he moved here in 2004 to further his studies). Mouthful Of Silence (BURNING HARPSICHORD RECORDS BHR 001) contains two long form pieces, entitled ‘Stillness’ and ‘Solitude’. Stillness and solitude – I love both of those qualities in life, so I’m already rooting for this guy. This release represents a studio-recording version of a performance issued in 2017 as Live At The Brunswick, and may be connected to Thompson’s concert programme, which he calls the Burning Harpsichord Series. If you buy this, you also get a download of Shifting Currents, an installation piece which I think is related to the same composition, and was toured live with Rick Reed and Keith Rowe (both established masters of minimal drone music).

The music here appears to have been realised with the Moog guitar. This instrument was developed by Robert Moog’s corporation in 2008, but didn’t quite take off with the musician community as was hoped, despite its ingenious additions which allowed better sustain, filtering, and harmonic blending; the inventor Paul Vo was inspired by the playing of Jimi Hendrix, and the breakthrough idea was to incorporate on-board circuitry into the body of the guitar. Maybe the high price tag put off a lot of would-be players, but it was just right for Bill Thompson. Although he did train as a jazz guitarist, his tendinitis means he can’t play the guitar conventionally. For some 20 years he grew his own table-top set-up, involving a laptop, found objects, and electronic boxes he made himself. Good enough, but the Moog guitar’s foot pedals allowed contact with a solid body of some sort (something you don’t get with the laptop).

Bill Thompson has been working at his craft patiently and methodically for a long time, and the hallmarks of his approach include “long sustained tones, densely layered textures, and indeterminate or improvised structures”, to quote his own website. The music on these CDs, both pieces performed in one take as solo recordings (working to a semi-improvised method), are the fruits of one year of work where he has been touring and performing the compositions live. I suppose it’s all this effort that accounts for the near-perfection of the music, its gently burnished surfaces shimmering and vibrating with a very compelling sheen. Calming and healing music, it has near-spiritual qualities which can only be good for the listener’s soul. From 17th September 2018.