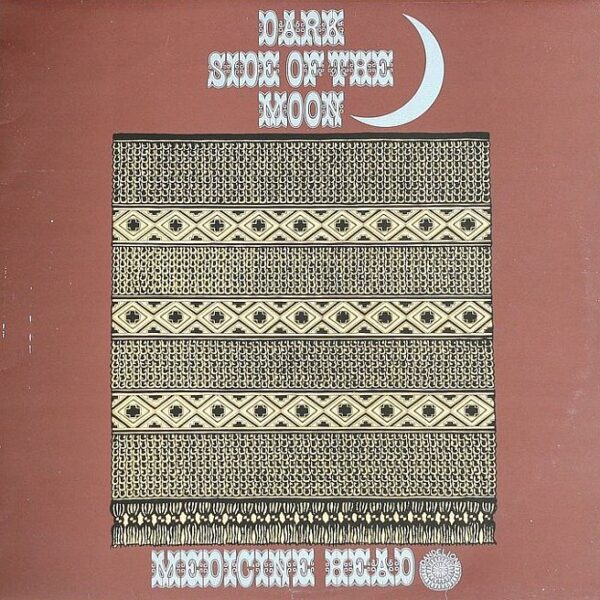 British 1970s blues folk band Medicine Head probably wished this third album of theirs were better known for its music rather than its title, and likewise that the recording had spent over 900 weeks on the US Billboard 200 album charts, just like the Pink Floyd album that was released a year later (1973). But as it is, “Dark Side …” is a gentle if somewhat depressive collection of melodic folk songs with the odd gritty psychedelic rock song here and there. The songs are sparse in style, slow in pace, and the singing by John Fiddler, while not outstanding, is mournful and monotone enough. For this recording, the band expanded from duo John Fiddler and John Davies to include temporary member Keith Relf (on bass guitar and production duties) who in a past life had sung lead vocals for Sixties rock band The Yardbirds.

Frankly some of the songs, even stripped down and given no more than a distorted guitar tone and the usual rhythm section backing, lack few redeeming features. Fiddler’s own singing suggests the vocalist was almost falling asleep over them, they can be that lethargic. The best tracks are the less folksy and more psychedelic blues rock numbers like the opener “Back to the Wall” which has an edgy riff and almost defiant attitude, and a briefly electrifying lead guitar solo; “Kum On”, a chunky tribal stomp with little licks of lead guitar gracing it here and there that I just can’t get enough of; and “You Can Make It Here” (whose introduction might remind more than a few people of the introduction to The Beatles’s song “Come Together”) where the singing, spacey and seeming disembodied with the reverb, and the guitar-playing, showing influences from Sixties legend Jimi Hendrix, hint that Medicine Head had potential to be more than just a straight bluesy folk band with some heavy psych tendencies. If someone could have convinced these guys to go for a style of dark doomy psych folk with a deranged edge and more expressive vocals, Medicine Head could have had a real chance of making the big time.

Doubtless the subject matter of the songs, their mostly doleful and enervated delivery and the equally lacklustre album cover were factors in “Dark Side …” staying firmly on the dark side of the moon where commercial album sales were concerned. Medicine Head were to release a few more albums after “Dark Side …” before disbanding in 1977 and continuing their separate paths in the music industry. Those TSP readers curious to know how this “Dark Side …” remains in the Sea of Obscurity while its 1973 namesake’s controls were set for the heart of the sun and never looked back are welcome to hear this recording at least once and judge its worth for themselves.