From Luciano Lamanna in Rome we have his Sottrazione (BORING MACHINES BM086) LP, made mostly by himself using a range of synths and keyboards. “Minimal, dark and nocturnal”, is how the press notes describe this record, and indeed it does sustain a fairly grim mood throughout its six tracks. The pace is generally a bit sluggish, but Lamanna does command some good sounds. Apparently he’s always been inclined to the “dark” in his music, even during the earlier part of his career as a DJ and producer when steeped in techno and hardcore. It might be through that route (i.e. crate-digging) that he’s arrived at his interest in soundtrack LPs; in fact Sottrazione draws some inspiration from the films of John Carpenter, a fellow who famously scored some of his movies himself and played a creepy synth drawl that has been a benchmark of quality to both soundtrack fans and musicians.

If soundtrack imitation is indeed the game at hand, Lamanna shines best on the B side, where the tunes feel more polished and arranged, and are aided by two guest musicians which really fill out the stark sound without over-egging the zabaglione; I mean the electric guitar of Manuele Frau on ‘Mai Piu Come Prima’, and especially the flute of Luca Spagnoletti on ‘Futuro Domani’. This track is the one to spin to your soundtrack-collector buddies in a blindfold test, and watch them trip up as they try and assign a date and place to the track. The four cuts on the A side, which is Luciano with his modular synth, Juno-6, Oberheim and various effects, feel unfinished in comparison – but still retain a certain diagrammatic charm. The “dystopian science fiction” theme (drawing from books by Philip K. Dick and William Gibson) feels a bit over-played by now, but the cover art kinda dovetails with the idea, flashing the sort of op-art colours you might have seen if you were a character in Logan’s Run before Michael York shot you down. LP is pressed in white vinyl. 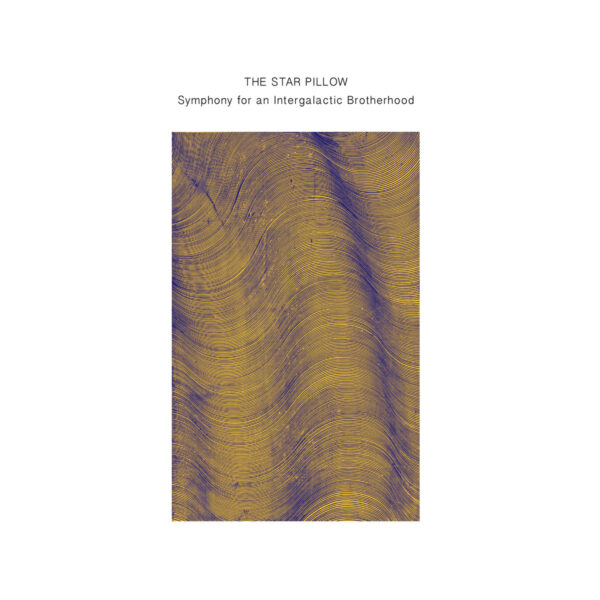 From same label, a solo record called Symphony for the Intergalactic Brotherhood (BORING MACHINES BM087) by Paolo Monti appearing here as The Star Pillow. Here the science-fiction aspect takes a vaguely “cosmic” turn, and the music suggests Monti would have been happy joining a covers band where the printed advert stated “must have complete set of Tangerine Dream and Popol Vuh LPs”. Monti is also a member of the quasi-occultist trio Daimon, whose creepster drones have been entertaining us for some time – last heard on their rather good 2018 LP Dust. However, he’s been doing the Star Pillow thing since 2007, sometimes with Federico Gerini, and there are a number of LPs for Midira, Setola Di Maiale and Time Released Sound for those who require more of this guitar-based ambient drone.

Unsurprisingly, he’s been invited to score indie movie soundtracks, and has done many live performances with his setup which evidently involves a fair number of effects boxes. Here, there are three long pieces of which the side-long ‘From Dust To Stars’ is probably the most effective; slow and lugubrious (like all the music here), but with a certain fascination to be found within the processed cosmic clouds of amplified strums and picks. In fine, he sounds like an entire army of musicians playing rusty metal cellos. Using simple repeated figures and short tunes, he mesmerises the listener and adds increased layers of fuzz, phase and echo as he goes along. This same technique, pretty much, is what he employs on ‘An Intergalactic Handshake’. On ‘My Dear Elohim’, Paolo reveals his predilection for tunes that are vaguely “gothic” in flavour, by which I mean they would be ideal for a 1960s horror movie featuring old castles, musty libraries, and thick velvet drapes lit by candlelight. So, while the intention was to send a message of “welcome space brothers” to alien civilisations, instead I hear something fit to invoke an unwanted visitation from a character penned by J.S. Le Fanu, bandaged up and wearing a nightcap.