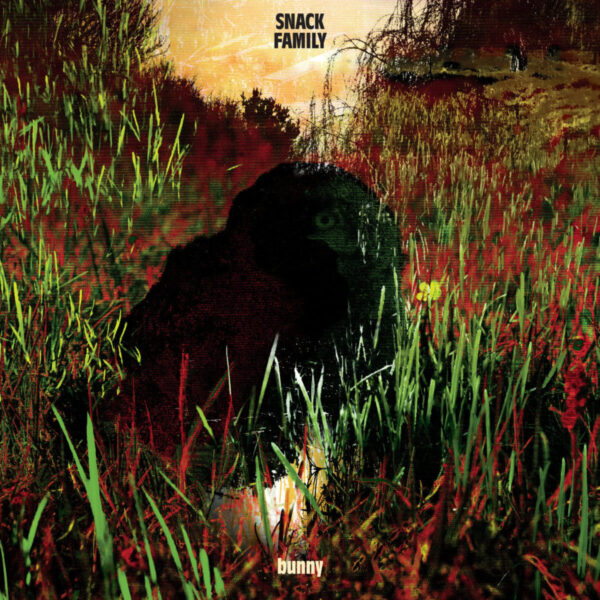 Rabbits! … a salute to those burrowers of the field. Their influence on popular culture is considerable as the following examples will attest. Apart from being the bane of Bishop (Len) Brennan’s existence in “Father Ted”, there’s also Roger’s wah-wah rabbits (“heard eating endives”), who make a brief appearance in the Bonzo’s “Shirt”. Let’s not also forget the certainly less-than-fluffy “Watership Down” animation from Halas & Bachelor and of course Jefferson Airplane’s “White Rabbit” But, Ms. Slick (and Mr. Carroll’s) creation is certainly of a milder nature than the Snack Family‘s Bunny, being a creature appreciably longer of tooth and longer of claw.

And that’s all down to the Snax line-up; sax, bass, drums and blather. The perfect vehicle where all hell can break loose, providing it’s in the right set of gnarly, calloused hands of course. And as the cyclic riffola of “The Strange Outside” bursts forth, it’s clear that if you’re in the market for all things raggedy-arse/unkempt, then everything’s going to be o.k. The mutated strains of folk-blues, outsider jazz of the Very Revd. Ayler variety and Hasil Adkins-nuanced rockabilly are cheerfully fed through the band’s mincer, forming new but beautifully ugly characters that you might not care to meet in an alley on a dark night. At times, the Cro-Magnon croon of Andrew Plummer (ex World Sanguine Report) even suggests a Tom Waitsian figure that has willingly swallowed Dr. Jekyll’s potion. Imagine! James Allsop’s baritone sax is gloriously belligerent and has a surly aside for anyone within range, especially on “Automatic Lover” and “Anti-Climb” with its engaged tone synth pulse. Engine-room duties are covered by Tom Greenhalgh (another ex-Sanguinite), here captured whacking the very bejaysus out of a junkyard drum kit which threatens to separate itself from its hastily applied spot-welds at any given moment. Drums as drums should be!

One extra boost to the group dynamic appears in the form of composer/guest vocalist Seaming To, whose choir celestials offer an eerie counterpoint to the gruffness of the main vocal line. “I am Bunny” and “Repeated Views” reminiscent of Cherry Red’s Prolapse, with the beauty v beast tag-team of Ms. Steelyard and Mr. Derrick (psurely pseudonyms?), now sadly confined to the back pages of history…

Meanwhile…. during the A.G.M. of the (Anti)-Social Club (European branch), noted dischordians like Italy’s Zu and Vakki Plakkula, Russia’s Brom and dear old Blurt are debating whether to enrol a certain new member to their craft.