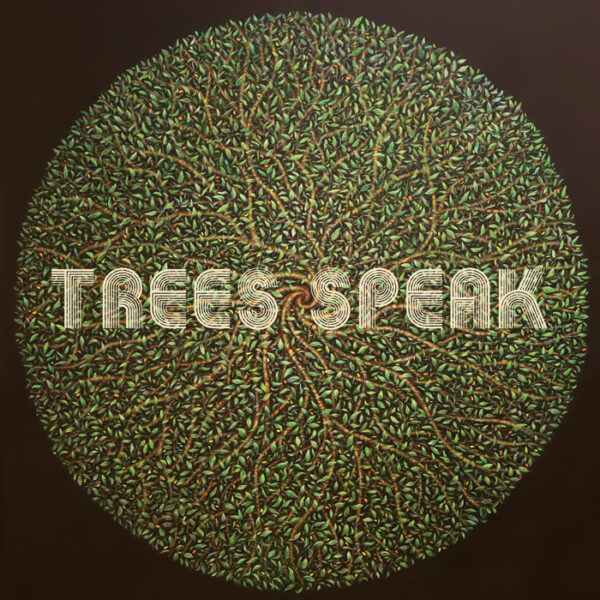 Contemporary rock music from Trees Speak on their debut release Trees Speak (CINEDELIC RECORDS CNTS 1.2)…the band is mostly guitarist, theremin and synth player Daniel Martin Diaz and drummer Damian Diaz, joined by guest players. The story of it is that they posted their music on Bandcamp and then got picked up by Marco D’Ubaldo, who runs Cinedelic Records in Italy. This label mostly specialises in movie soundtracks and library record reissues, but they do occasionally foray into other musical genres. The deal worked out well for Trees Speak, as the record has been given a smart-looking presentation with full-colour inner sleeves, art print, postcard inserts, and clear vinyl pressing (for the limited edition version). Flushed with success, they immediately deleted the Bandcamp account and are now pinning their hopes on success with this release.

Trees Speak are evidently influenced by 1970s Krautrock and contemporary guitar drone bands, and would like to be considered “experimental”; in some ways this music wouldn’t have sounded out of place on Harmony Of The Spheres, that box set that compiled droney guitar music from Bardo Pond, Roy Montgomery, Jessamine, and other psych-influenced space-rockers. But that was in 1999. Sorry to say that Trees Speak don’t really do much to advance any of these musical styles, and I found the whole record rather ordinary. On the first LP, there are 15 tracks featuring Daniel and Damian, joined by second guitarist Michael Glidewell; as he used to play in Black Sun Ensemble I was hoping he might inject a bit of fire and darkness into these studio sessions, but I was disappointed. These tracks feel like unfinished studio experiments, many of them lacking satisfying conclusions; the playing is competent enough, but not imaginative and lacks innovation; the sounds are mediocre, despite their avowed interest in the band being a “sound laboratory” and “creating a sonic environment”. Their studio experimentation lacks boldness, adventure; the use of echo and similar effects verges on the cliché. The use of a Numbers Station sample on one track is one noticeable gaffe.

The second LP is taken up with a continuous suite of noodling music, called ‘Shadow Circuit’ and presented in two halves. Here the band are joined by guitarist Connor Gallaher, bassist Gabriel Sullivan, and drummer Julius Schlossburg takes over on the kit. About half of it is cosmic space-drifting with electronic enhancement, the other half is driving up-tempo rock in the Hawkwind mode (and might qualify them for inclusion on a guest spot on a Sulatron Records release). If I had to choose I would say this music at least has a little more drive to it than the sketchier LP 1, perhaps because there are more players in the room and together the personnel manage to fulfil the aim of “spontaneity” which appears to be one motivating force behind Trees Speak. They are at some pains to emphasize that they never rehearse anything and use the studio to capture the energy of the music as it emerges, to “capture a magical moment”. Even so, ‘Shadow Circuit’ has evidently been stitched together from a number of sessions to form a continuous suite. Nothing wrong with doing that (after all that’s how Pink Floyd assembled ‘Echoes’ and many other records too, probably); they admit to using the mixing desk to edit and assemble, but in their notes they have the hubris to compare that process to the work of Holger Czukay and Teo Macero, while I’m afraid they lack the radical ideas of either creator.

I think Trees Speak have it in them to make a punchier recorded statement, if they could hone their playing skills a bit more and waste less time in the studio; spontaneity is good, but I’m looking for more tension, passion, and original ideas. Full marks for the packaging on this one, and not the world’s worst debut, but the music is largely mediocre. From 4th June 2018.