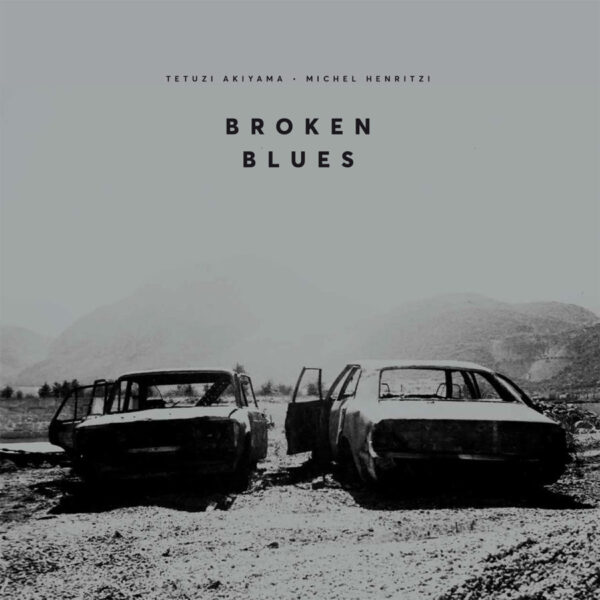 Michel Henritzi continues to be good mates with stellar players in the Japanese improvisation pool, and on Broken Blues (REKEM 11) he joins up with Tetuzi Akiyama. Tetuzi is a very honest player in my book and has rarely laid down a duff note on record, nor in performance; plus he seems genuinely committed to innovation, exploring new ways of playing the instrument.

This particular record feels exceptional for both these players, though; it starts out as something resembling free improvisation (though atonal, stuttering, and uncertain, it does at least include recognisable guitar notes), then swiftly develops into all-out racket. Free noise made the acoustic way…tools normally associated with woodwork and carpentry were freely deployed, including the electric drill, saw, hammer and nails, and I don’t like the sound of those “machine screws” which are included in the Japanese fellow’s list of credits. By record’s climax it feels as though we’ve witnessed the complete demolition of two guitars…even if that isn’t true, and they were simply applying all that effort to blocks of waste lumber rescued from a skip, it’s the thought that counts. Lovers of vintage Gibson hand-made guitars are advised to look away at this point.

Without a doubt this is taking the precept of a “prepared” instrument in the John Cage mode to a much more violent place, and in the process the pair manage to make a statement about the “deconstruction” of music, starting with one of the most ubiquitous of instruments ever to have passed into the hands of an amateur and professional alike, the acoustic guitar. But Broken Blues also works as a listening experience; more percussive than musical, there are no end of bumps and thumps (some of them produced by rough handling of whatever is attached to the contact mics), but also plenty of hammering. On the strength of this record alone, they would be hired on many building contracts…this disc should be used as their business card to get jobs. Also plenty of howling, some feedback screech, rubbing of guitar bodies, and what could be metal strings howling in agony as they fall away from the comfort of the long wooden neck. “Acoustic Merzbow”, “The New Blockaders rethought as a woodwork lesson”, and “a Sonic Youth bootleg from when they tried to make a cover album of John Fahey tunes” – these and other such inane clichés are ready and waiting in the note-book of music journalists everywhere.

Image of abandoned car wrecks on cover confirm the “junkyard” aspirations of this LP, and also vaguely connects I think to Michel Henritzi’s “Old Wild West” leanings, such as found on his O’Death Jug records. A single-sided vinyl LP, from 3 August 2018.