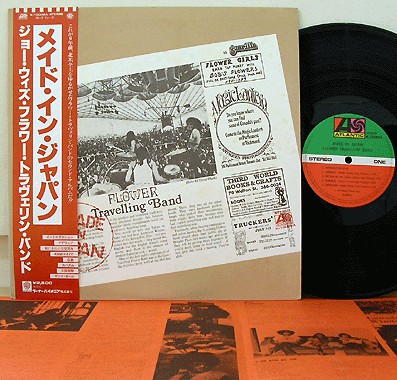 Pedantic TSP readers may say the album should really be “Made in Canada” since Canada was where this follow-up to Flower Travellin’ Band’s previous opus “Satori” was actually done with the production duties handed over to the leader / keyboard player (Paul Hoffert) of Canadian jazz-rock band Lighthouse whom FTB met at Expo ’70 festival in Osaka. FTB’s drummer Joji Wada was ill with tuberculosis at the time so he was replaced by a Canadian drummer. Perhaps for these reasons, “Made in Canada”, er, “Made in Japan” sounds ordinary and cramped compared to the classic “Satori”. The band’s style is less heavy than it should be right across the album, with the fire of “Satori” glowing occasionally when it should be warm and threatening to become super-heated. Songs may be shorter, more focused and upbeat but the band’s freewheeling spirit and the varied moods the musicians were able to generate on “Satori” are absent.

The album opens with the mostly acoustic and plodding “Unaware” which is notable mainly for Joe Yamanaka’s impassioned and impossibly high-pitched shrieking and some fiery licks from Ishima. I’ll pass over “Aw Give Me Air”, a trundling effort that ties down Yamanaka and Ishima too much to Planet Earth with an overpowering rhythm and melody.

It’s only with “Kamikaze” and “Hiroshima”, the second song being a reworking of the sinister riff from “Satori Part III”, that FTB find their true calling and soar high in the heavens with Yamanaka’s impassioned and impossibly high-pitched wailing vocals and Ishima’s equally shrill and sometimes gritty lead guitar soloing. The reused riff in “Hiroshima” becomes the support for half the song and retains its menacing quality although the whole track, while very good, isn’t a patch on the original for sheer improvisational inspiration.

“Spasms” contains moments of sheer six-string derangement, especially when Ishima suddenly goes haywire thrashy. By contrast, “Heaven and Hell”, while an uplifting number that could have been a single, seems like FTB dozing off on some weakly magic mushrooms. The album’s closer features some nice sitar and fake sitar sounds from Ishima and a distinct darkly echoing guitar tone. Yamanaka’s singing comes across as amateurish and far less than enthusiastic.

With just a few songs really hitting the accelerator with regard to energy, a fiery delivery and soaring vocals, the album is at lukewarm level generally. If FTB hadn’t made such a stunning recording in “Satori”, perhaps this successor work might not have come in for such harsh criticism but would be seen as a very good if still flawed album.