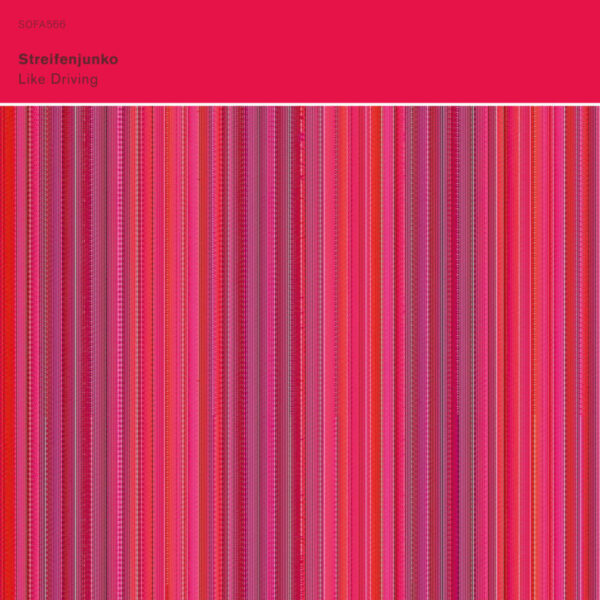 Streifenjunko are a duo of Norwegian players Eivind Lønning and Espen Reinertsen, whose earlier releases for the Sofa Music label (No Longer Burning and Sval Torv) didn’t cross the desk at the time, but they’ve tended to focus on all-acoustic playing with their trumpet and saxophone / woodwinds pairing. Until now that is, since on Like Driving (SOFA 566) they’ve introduced electronic components into their performances. Part of this setup includes automatically-generated sounds emanating from the boxes in some way, and the performance seems to include the action of applying “starting and stopping signals”.

This strategy has provided Streifenjunko with something not unlike a pre-programmed road map to follow as they puff their slow, simple notes; they liken the process to driving a car, hence the title. They also seem to relish the possibility of unexpected changes in the flow, so perhaps this self-generating software (if indeed that’s what it is) almost has a mind of its own, contributing passages of ever-renewing surprise in a halting manner. If we are expected to apply the driving metaphor as we appraise this, then ‘Everything We Touch Is Electric’ is about the slowest crawl I’ve ever hitched – even the bus inching its way over Waterloo Road in heavy traffic does better. However, despite the pedantic deliberation of the playing, the air still crackles with a certain tension, like that of strangers uncertain what to say to each other; and the combined instruments sound like a souped-up harmonium with three feet pumping the bellows. If they wanted to combine this software of theirs with a sat-nav box, I don’t expect it would sell too well, but at least the driver would arrive in a serene state of mind.

Which brings us to ‘Astronaut Peace’, where there’s hardly any stop-starting at all, and what emerges is like a flabbier version of a Yoshi Wada drone. And yet, even these shifting planes of brass and woodwind tones contain a certain eerie fascination, almost transparent in hue. Probably we are supposed to feel like a weightless astronaut floating round his tin can; it certainly isn’t much of a “driver”. An even lusher set of drones can be found on ‘Like Driving’, the 19 min title track, and here we’re getting back to the switcheroo element which is intervening in the smooth music-making process like a well-meaning hardware store owner, offering you tools of various sizes until you find the one that fits.

Perhaps “intervening” is too strong a word for these rather mild changes that are taking place; it’s certainly not as crazy or wild as a John Zorn game piece, for instance. Instead, it’s a bit like turning switches or applying dampers / diapasons on an organ manual. The changes are largely being wrought on the tone and pitch, rather than determining the direction of the music very much. No wonder the players sound so relaxed; it’s like a game of dodgem cars happening very slowly, in vehicles made of foam rubber. From 12th October 2018.