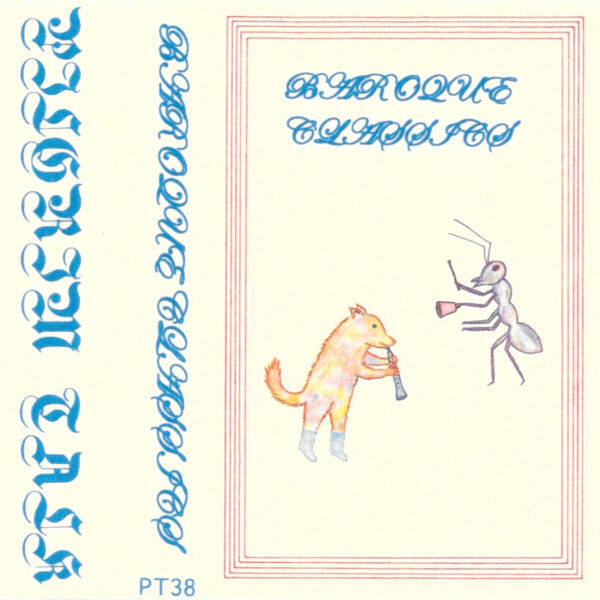 Latest cassette from Nick Hoffman appearing as Pilgrim Talk is Baroque Classics (For Electronic Oscillators) (PILGRIM TALK PT38), a release which I would like to think is a follow-up to his 2017 tape Parvae Harmoniae on which he performed some 15th century classical greats on the acoustic guitar. This time he turns his laser-like musical eye on the baroque period in European composition, that post-Renaissance style whose dates are generally agreed to be around 1600-1750. Pilgrim Talk performs short instrumentals by Scarlatti, Bach, Ramaeu, Handel, Buxtehude, Couperin, and others, and they’re all realised by what I would assume is methodical and labour-intensive programming of his synth’s oscillators.

Before you all accuse him of pulling a Switched-On Bach move, give this a spin and you’ll soon realise how far Hoffman’s intentions are from that particular series of pop-novelty records that blighted the early 1970s (and probably stayed in print for ages). Much as we all may enjoy Walter Carlos’ music, they did a lot of things to sweeten the deal for the non-classical listener, and there was, I think, a certain amount of effort (overdubs, studio enhancement) in making sure that the synthesiser didn’t seem too “inhuman” to listeners. If anything, they were aiming at the effect of an electronic harpsichord. Pilgrim Talk, by contrast, admits of no compromise to the purity of his vision, and creates a near-absolute form of electronic music that insists on its own machine-like sound. He also exploits the potential for precision, executing complex compositions with an accuracy you could use to set a Swiss watch. If I am right, there would be close to zero conventional keyboard-playing going on here, and instead we hear a machine repeating a stream of encoded information, with next-to-nothing by way of intonation or warmth, all of the things which classical performers are supposed to live by.

In sacrificing this much convention, does Pilgrim Talk end up with an unlistenable collection of cold, absurd tones on Baroque Classics? Far from it…it’s a supremely engaging and even entertaining spin, and for someone like myself who knows very little about this side of classical music, it’s an absolute treat. I’m fairly certain Hoffman genuinely loves this music for all sorts of reasons, and this is not a sarcastic riposte to the conventions of classical composition; rather it’s his own personal take on the genre, and the synthesiser is used in such a way to uncover a hard core of truth about the music. It seems, in short, that perhaps the compositions are so strong that they don’t really need a trained pianist to “interpret” them; at least, not when you have a thinking-machine of the sort that Hoffman is capable of building and letting loose in the musical laboratory. For some reason I am reminded of a lengthy and bad-tempered essay by playwright and screenwriter David Mamet, in which he explained in some detail that he didn’t want professional actors interpreting his written words; he’d much rather they just read the lines. Mamet had already done all the work necessary, he insisted. My analogy may or may not stand, but I hope it piques your interest enough to investigate this lovely tape.

What I would like next if he would apply this same technique to Michael Nyman’s score for The Draughtsman’s Contract; now that, I would buy! Love the ant and the bear drawing on the cover too. And that cheesy gothic font must be deliberate; makes the whole package look like a Commodore cassette game from the 1980s (and the surface sound of the music is just one step away from chip-tune style, too). Essential! From October 2018.