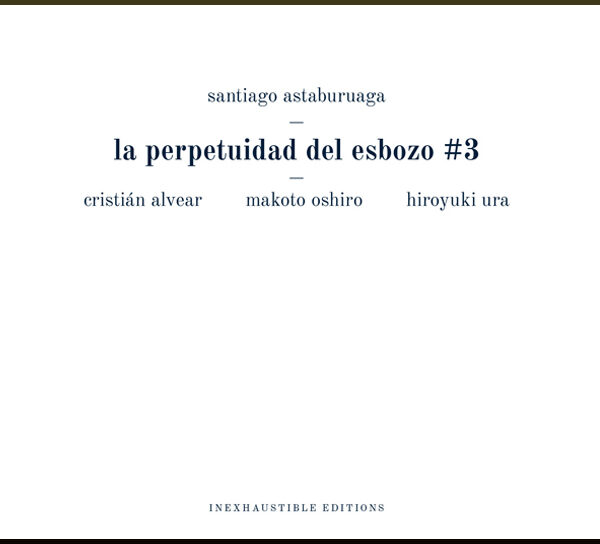 Very impressed with la perpetuidad del esbozo #3 (INEXHAUSTIBLE EDITIONS ie-008), a composition by the Chilean composer Santiago Astaburuaga. Astaburuaga has appeared on recordings quite a few times in recent years performing with fellow Chilean Cristián Alvear, the fine (very restrained) guitarist and composer whose delicate work has crossed our path a few times now, and indeed he plays on this recording, the latest in a series of unusual items from the Inexhaustible Editions label. Also appearing are Makoto Oshiro and Hiroyuki Ura, both Japanese players with whose work I am far from familiar (although the former has played with Tim Olive).

la perpetuidad is an odd one; for one thing there’s the rather unusual instrumentations, printed here with a very specific credits list – already I am intrigued to know more about Makoto’s “kachi-kachi electromagnetic relays”. I suppose if you summarised it all they are playing a combination of guitar, electronic devices, percussion, voices, and field recordings – but that shopping list overlooks the niceties of sine tone generation and speaker placement. Even the field recordings – here called “archives” for some reason – are lovingly detailed, some of them being lifts from performances, or recordings by other musicians, all folded into the work. All three of them do this, and perhaps the composition called for it. It’s some way from what we would understand as “sampling”; for one thing the source musicians are relatively obscure, such as Dawang Yingfan Huang and Uchu Hakase, although I am familiar with Nick Hoffman at least (and he’s a man who would feel at home in the company here, I expect).

The second thing to understand is the compositional structure, which evidently works to a set of prose instructions with very precise ideas about duration, order, and segmentation. These are in effect rules which govern the production of the music, which is not a new thing, but I’ve rarely heard it used to such powerful effect. I say “precision” because the entire work lasts exactly 40 minutes to the second, and the grid of numbers printed inside the tray looks like something which would be more at home in a book of algebra. The art that emerges however is far from laboured, stilted, or mechanical; rather, it’s very warm, gentle, feels quite spontaneous in places, has a great deal of humour, and is packed with unexpected surprises popping up every other minute. Quite often, the musical moments in these episodes are so lovely that I just wanted it to keep playing forever, but then the next shift occurs and it’s all-change. In a way, there might be enough good ideas here to fuel several hours of such music. A mosaic, if you will, of beautiful music fragments that somehow coalesce into a very satisfying whole.

The title here translates more or less as “the perpetuity of the outline”, a resonant statement if ever there was. Perhaps Santiago Astaburuaga conceives of this work as a plan for a larger piece of work. I am mystified, in a very good way; this Chilean may have discovered a new musical code. If he has, it’s a very productive one. Great! From 15th October 2018.