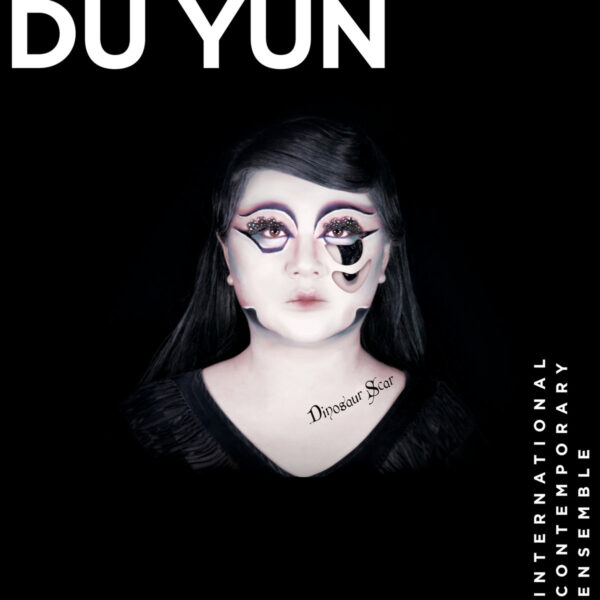 I feel exhausted just reading about the accomplishments of Du Yun, a Shangai-born musician currently making good in New York. Composer, performer, curator of festivals and player of many instruments, she’s been busy creating works which operate at several “intersections”, as the critics like to put it, which means she wants to experiment with opera, electronics, musical theatre, free improvisation and poetry recits with her works, often overlapping two or more of these forms and genres within the same piece. Plus she finds time to create sound-art installations and lead her own band OK Miss, in playing her unique brand of art music. You could gain some idea of the scope of her energy and achievements by spinning Dinosaur Scar (TUNDRA TUN011), the record before us today which contains ten compositions from the last 20 years of effort, and the variety is pretty staggering. The International Contemporary Ensemble play a couple of the larger chamber pieces, including the opening ‘Impeccable Quake’, which is certainly one of the densest pieces on the disc…lots of percussion exploding everywhere within a tangled thicket of strings and woodwinds, in a piece which sprawls every which way in enjoyable fashion. It’s supposed to represent some internal energy, an explosion…I’d imagine Du Yun feels herself to be a pretty explosive force herself, come to that. Did I mention she founded this Ensemble herself, if you want to add more things to the growing CV. They reappear at the end of the set, on ‘by, of…Lethean’, likewise deploying strange mixed chords and weird dynamics, creating an abstract entity that does indeed seem forceful and active, agitated, yet it’s a beast with nowhere safe to land.

The piece I enjoyed most is called ‘Air Glow’. A number of brass players are joined by one electric guitar player; the brass section really comes up with some exceptional mixed chords and interesting clashing sonorities, with moments of shimmering beauty. The guitarist, natch, pulls things in a different direction. By this point I felt I had an inkling of one of Du Yun’s signature themes, which is to have two (or more) contrasting dynamics in everything she composes; almost every piece here is pulling in two directions, and some of them take it further – like a classical Greek hero wrestling with an enormous snake. Bend an era to ‘Vicissitudes Alone’ for a stark illustration of this; Daniel Lippel plays a steel string guitar, while Du Yun supplies the pre-recorded sections of zheng playing, that famed Chinese lute. Just two instruments, yet it verges on a form of musical anarchy, not least due to the energetic way Lippel is pulling on his “axe”. The piece may also be expressing something about the clash of Eastern and Western cultures, attempting to co-exist on the same page.

Also digging the nocturnal atmospherics of ‘Dreams-Bend’, which is mainly an excuse for our heroine to recite her very personal and stark text about dreams of flight and fear. Much anxiety and uncertainty in the chords suggested by simple clarinet-violin-cello set-up. Another one that’s nocturnal and macabre is ‘Run In A Graveyard’, on which the flute of Claire Chase is lightly treated with some understated electronic enhancement; delicate atmospherics seem to tell a ghost story. As for the title piece, considering it has a thunder-lizard in the title I was hoping for something of the grandeur and heft of a T-Rex, requiring at least two chamber ensembles to do it justice. Instead, it’s a solo work for the alto sax. Ryan Muncy works overtime to create endless whining from his melancholic bell, occasionally varying the high-pitched tones with a lower-register roary glomp eruption. From 1999, Du Yun boasts that it’s the earliest work on the whole CD and assures us “it still rings true” – an explanation that leaves one hungry for further detail. From a distance you could mistake this sax solo for a free improvisation, even though it is composed – but Du Yun also embraces free improv, as evidenced on one piece called ‘The Griffin’ (rather lugubrious anthem to this mythical creature, but it’s always good to hear a viola da gamba on record) and another one called ‘The Naga’. This second one is just great – unusual (in this context) set-up of table-top players with live electronics and objects, including a typewriter. For a few glorious moments, it rattles like a subway train to paradise. Shame it’s so short.

Lacking the musicological skills to appraise this highly contemporary work, I feel I am missing something vital with these subjective appraisals. You might get a better steer from the verbiage on the press release, which often describes the music of Du Yun as “gestural”, and alerts us to her “finely tuned sense of structural pacing”. From October 2018, available via New Focus Recordings.