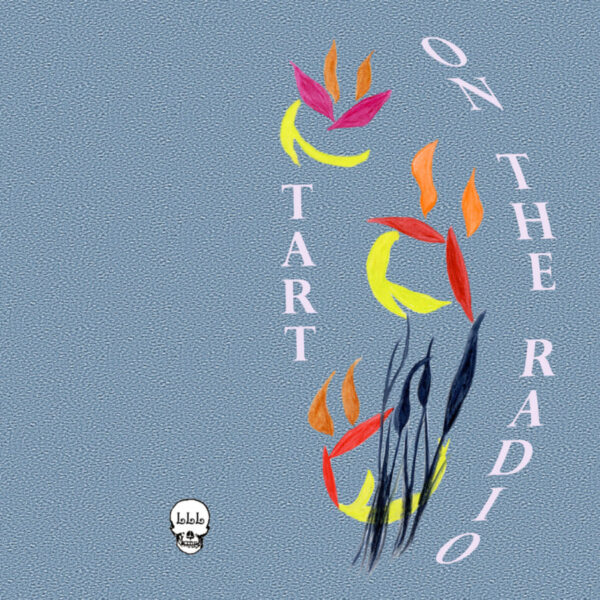 On The Radio (LATHELIGHT LTD LLL028) is a cassette that rescues some historical-ish broadcast materials from the American trio Tart. It’s a shame that they get overlooked in the fabric of music’s past to some extent as this short-lived trio – amazingly managing to bring together Graham Lambkin with Scott Foust and Karla Borecky, the team behind Idea Fire Company – carved its own individual niche into the genre of electronic art music. Only two LPs, Radio Orange and Bring In The Admiral, were released between 2001 and 2003; the earliest recordings here, those on side one, date from 1999.

The Tart “method”, if such there was, was to use sampling, electronics, and keyboards, to create various short repeated passages which somehow fit together and formed the fabric of the piece. The trio would improvise to a certain extent, even make some vague plans beforehand, but the work only emerged by actually playing it. As with Idea Fire Company, I can hear Karla supplying the melodic aspects on her keyboards; Foust is being typically austere and mysterious. I have no idea what Lambkin is playing specifically, but if nothing else he is supplying that aura of strangeness and blanked-out amnesia that characterises a lot of his sound-art works since. Both sets were recorded for WMUA, which is the Amherst college radio station in Massachusetts; on side A from 1999, we have five pieces with evocative titles such as ‘Diving Bell’ and Here Comes The Victim’, and these project every emotion from wistful longing to puzzled bewilderment.

Although Tart used much repetition, nothing quite fits together; this mismatch turns out to be one of their strengths, along with the subdued yet insistent way that the noises / sounds are generated. There’s also the slightly inconclusive feel, as though it’s not quite clear when the music has started nor when the ending has arrived, yet all three players know just how to time their movements together. This 1999 set might represent the earliest snapshot of Tart, and shows an entity not yet sure of its place in the world, its movements uncertain. While I seem to recall the Radio Orange LP could have been mistaken for Cologne kosmische music of the 1970s, this tape so far is much more austere – Brian Eno by way of Asmus Tietchens. The B side contains just one piece, ‘Garden’, from 2002; and here we can tell the band is already a lot more confident and comfortable with each other. The three-way loop-sampling and electronic cross-talk is now locking together in a far more productive fashion, almost edging towards a soft-motorik groove. Yet it’s interesting how the players never settle into a trance-like state or fall asleep to their own comforting drones; I think this is one of the conditioned responses to music-making which Foust was intent on avoiding, if he possibly could. Accordingly, he keeps roughening up the surfaces here with foreign bodies and strange emanations, while underneath a loop-structure (perhaps comprising voice samples) attempts to dream of a Disneyland heaven with its baby-like whimpers and hummings.

It’s unfortunate that Tart didn’t enjoy greater success, as there were few people making an original noise like this at the time. From 17th October 2018.