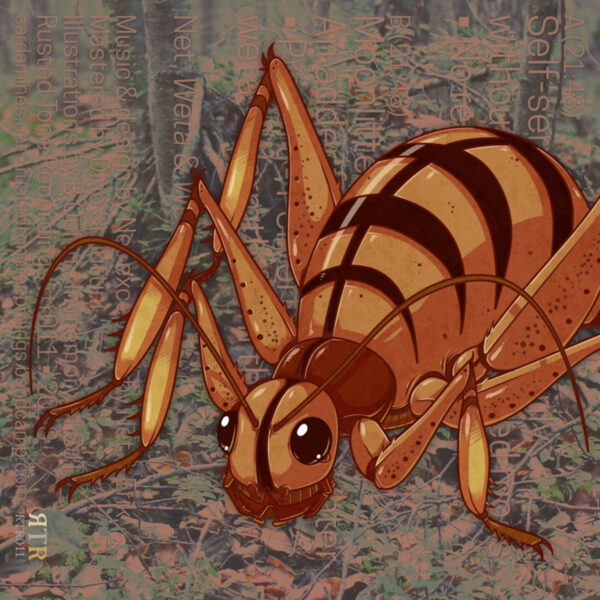 Although Net, the ambient electronic music outlet of one N Edward Trethowan, currently based in Tampere in Finland, has been active since 2007 and released a number of recordings on quite a few labels in the UK and France, “Weta & Weta” is his first full-length release for Rusted Tone Recordings. To my everlasting shame it also happens to be the first album of his that I’ve heard as the music, concocted from a mix of ambient recordings and electroacoustic sounds, is varied in its sonic range, moods and expression. With the exception of “Chapel of Frosted Moss”, most tracks are not very long and run like mini-soundtracks describing self-contained little universes. They range from melancholy, possibly nostalgic mood pieces to busy little soundscape tapestries of electronic wildlife that (if organic) would normally pass under most people’s radar.

For me, the most fascinating tracks are those like “Chapel of Frosted Moss” that describe a near-microscopic world of silicon-based insect life-forms, all calling out to each other by rubbing their legs or beating their wings incessantly and varying their calls and responses as part of a huge choral swarm, such that the pointillistic noise they create comes to take on a spirit of its own that generates its own patterns – which come across as melodies or particular atmospheres to human ears. An alien sighing quality, ghostly yet beautiful, possibly passing on messages or visions from the recent past, is usually present and lends the music an almost futuristic, post-apocalyptic air.

It’s frustrating that some of the more interesting pieces are very short while others like “Moonlitter” and “Pervert” are monotonous and could have been shown the portal into another space / time dimension. Other listeners may beg to differ: I guess one’s perceptions that form during the first couple of tracks about the album are going to affect how one perceives the rest of the recording. If listeners have the digital version of the album, the recording lends itself to random hearings starting with any track and then following listeners’ whimsy. However folks decide to hear the album, they should end it with the very last track “Warmth from the window” which is a very sultry relaxing piece that may remind listeners of last summer’s cicada orchestras serenading a hot sunset.

Fans of acts that dive into, hmm, well not really technically similar music but which features found sound recordings that emphasise melancholic nostalgia – I’m thinking of acts like the Fossil Aerosol Mining Project or William Basinski – are advised to investigate the various little worlds co-existing on this album.