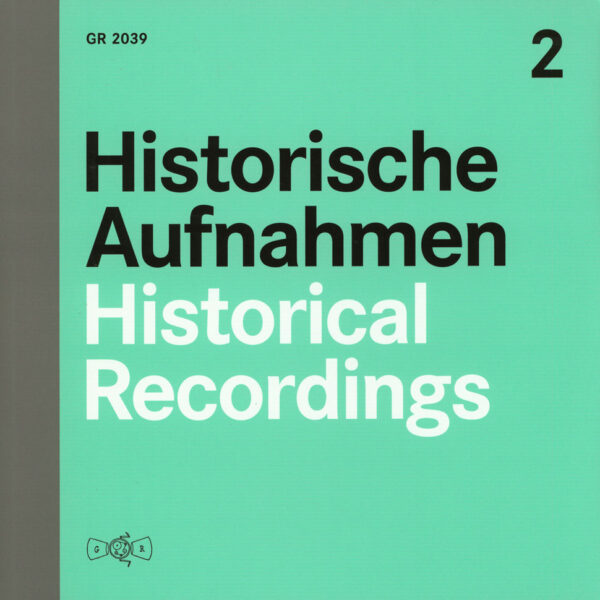 We very much enjoyed Volume 1 of Historische Aufnahmen in 2011, noting it in the pages of TSP 20. A gatefold LP with extensive notes, it was a brilliant and witty forgery purporting to contain rare, overlooked and unusual examples of sound and music from history. Now we have Historische Aufnahmen Volume 2 (GAGARIN RECORDS gr2039), which continues the idea with a further ten examples of Felix Kubin’s imaginative and ingenious hoaxes.

Volume 1 was studded with famous names from musical and political history, included some plausible field recordings and found tapes, and generally did its best to implant its fictions into an alternative slant on 20th century history. Volume 2 goes further down this route, this time finding examples of loners and eccentrics, with their strange inventions and devices and musical ideas, somehow managing to leave behind odd traces of their work and activity. Here’s a throat clinician from Buenos Aires who invented mechanical larynxes, and here’s a tape of these appliances being tested. The pseudo-scholarly notes remain deadly serious as they try to “reclaim” this work as a form of electro-acoustic composition, since music by Luc Ferrari, Parmegiani and other GRM composers were also found in the donated box. The eerie wails of throat music lie somewhere between composition and therapy. On ‘Automatischer Holz-Pianist’, we hear Arthur Kneal’s mechanical piano from 1930. He was supposedly a joiner and built an elaborate device, an automaton / mechanical man playing the instrument. When he tried to give a public demo in Leicester, the device was damaged in transit and it all went wrong (we can hear the audience laughing at the disaster). Both stories are entirely plausible, yet also completely preposterous; it’s this boldness in invention that makes the Historische Aufnahmen series so thrilling.

Another eccentric inventor is described on ‘Lecksuchmikorfon’. It’s all about a special microphone to detect water leaks. This recording is “rescued” from a 7-inch promotional record; the inventor hoped to market his device at the World’s Fair in 1962. The sleeve notes refer to “technical location”, while cleverly evading the detail of how this idea would work. The supposed inventor was a frogman in the war which may have something to do with it. The resulting odd tones on the record are combined with a very “straight” speaking voice. Meanwhile near the end of side two, there’s the priceless recording by Bayani Roxas, an obscure film score composer, for a movie called Island of the Pig Men. The fiction here proposes that there was a Filipino film-score “scene” in the late 1970s, and here is the work of one of them, who was creating cheap sci-fi and horror soundtracks. Again, it’s a plausible myth, since the Philippines were being used by Hollywood at this time for cheap labour and locations. The music is all cheap organ and nasty synth pulsations. The notes don’t miss a trick, fictional film titles and all.

There are also two tracks building on the work of Friedrich Jürgenson and his EVP recordings, an occultish theme carrying on from Volume 1. ‘Les Esprits’ is a recording of a séance, with odd musical tones, loops, obscure voices, and piano; genuinely affecting. ‘Optaget I Pompeii’ is even more ingenious, since the first para of text is quite factual in its description of Jürgenson’s life (no better way to bolster a hoax than to smuggle it in surrounded by real facts). In this yarn, he went to Pompeii on various visits and accidentally recorded voices of people speaking in dead languages. Since the background noise is mostly cicadas chirping and archaeologists digging, it’s a real a challenge to “hear” these voices, but the intrigue level scores high. 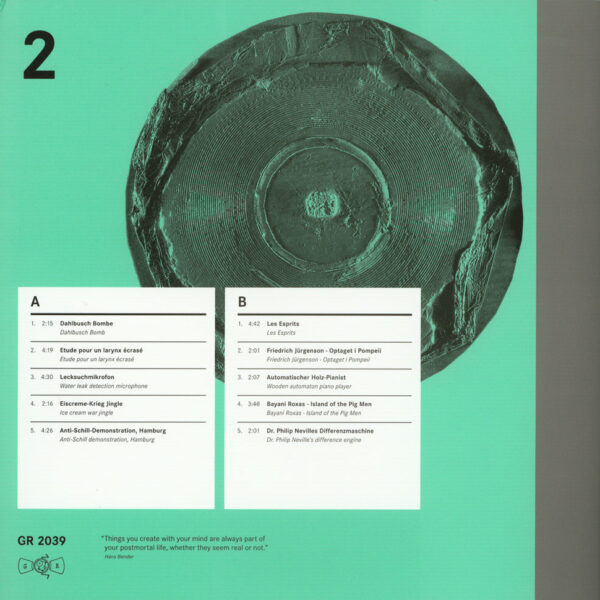 These are but some of the highlights on this ingenious construct and I would feel like I was ruining your fun if I told you any more (though the one about the Scots New Wave musician who created a song to be played on an ice cream truck is a miniature masterpiece of urban myth-spinning). I find there’s a rather sad undercurrent to this collection; so many of these fictions end in death, failure, or lost documentation, sealing each story with a trail-goes-cold element, just in case we wanted to check up on anything. But this is surely one of the subtexts of Kubin’s work. How do we know or understand anything in culture? Though archives, records, and context; by inventing his own rich alternative histories of the 20th century, populating them with fictitious names and non-existent accomplishments, Kubin embellishes details of things we already know to be true and makes them come alive in a new way. To put it another way, we really want these hoaxes to be true.

Sonically, it might not be as exciting or surprising as Vol 1, but the stories are better, and it’s a delight – the totality of the experience is playing the record and reading the stories together. Or to use Kubin’s own expression, “This is above all a literary project. Sounds and texts are complimentary, one doesn’t really work without the other.”