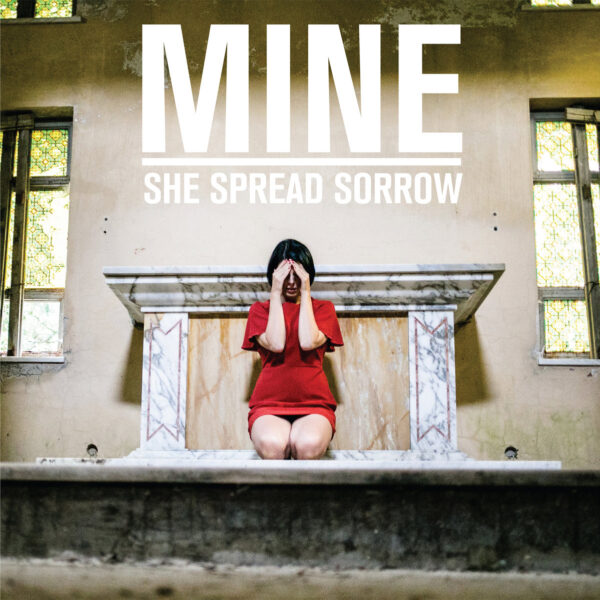 Chilling industrial-tinged electronic and voice work by She Spread Sorrow on her album Mine (COLD SPRING RECORDS CSR231CD), only her second release and yet fully-formed is her spectral appearance – here she stands in the room like a disturbing avenging angel, seeking vengeance for we know not what. This is the Italian solo act Alice Kundalini, and besides making this unsettling music she also appears photographed on the cover in her red dress, posing on every part of a full colour six-panel digipak in what appears to be a semi-transgressive piece of performance art taking place inside a church, where she’s pictured kneeling in prayer or laying out flat on the altar. At all times she looks penitent and disturbed, body wracked with doubts, apart from one shot where she looks down at the viewer with something approaching withering scorn.

On the grooves, you can expect mostly creeping electronic minimalism performed with the skill of a micro-surgeon, calculated to freeze the marrow and tense every nerve in your terrified bag of bones…on top of these ice-cold emanations, She Spread Sorrow whispers her deathly intonations in the calm, deliberate tones of a sociopath patiently explaining why they are going to kill you. Actually it’s not all quite as menacing as that; half the time she seems to be owning up to her personal sinful thoughts in the confessional box, consumed by Catholic guilt, barely able to admit these terrible things even to herself. While there might not be anything directly obscene in the content (and I can only make out about 50% of what she’s murmuring anyway), some of these private rants appear to be getting pretty close to the bone and near the knuckle, passing on impressions perhaps of forbidden sexual acts, a certain degree of self-disgust and “body horror”, or otherwise unwholesome predilections.

While this whole “transgression” angle when practised elsewhere has left me cold for many decades now, there’s a very personal dimension to She Spreads Sorrow which is something I can endorse. It’s as though she’s making a direct connection with her own thought processes, giving vent to ideas as they simmer in the brain, rather than simply reading aloud from a prepared script of shocking words or flicking through a book of stock taboo images. It’s also possible she may be in a line with other solo female acts who have been treading this dangerous ground for about ten years – Pharmakon, Puce Mary and Sewer Goddess are all named on the hype sticker, and while I never heard their music they all seem to be probing those uncomfortable zones left unexplored by the previous generation of feminist performance-art shockers, such as Diamanda Galas, Lydia Lunch and Annie Sprinkle. I also like the phrase “sinful power electronics” printed on said hype sticker, as in my mind this cements the release firmly in the Catholic-guilt confessional area as I suggest above. Not a happy listen, but a cathartic one for sure. From 8th November 2018.