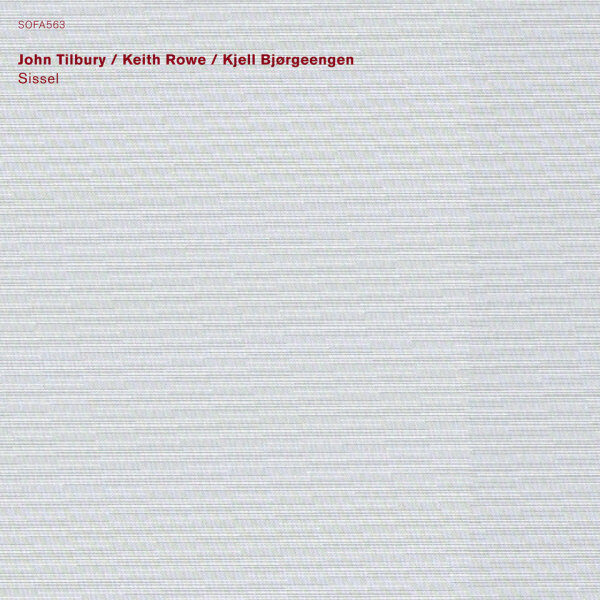 Here, two thirds of AMM – Tilbury and Rowe – are joined by filmmaker Kjell Bjørgeengen at a 2016 concert at Moving Sound in Stavanger in Norway. Bjørgeengen has worked with the pair since 2015, apparently being involved in the capacity of producer of Rowe and Tilbury’s enough still not to know – a four-disc box set from 2015 also on SOFA. Here on Sissel, he is credited as a co-performer. Examples of his visual work adorn the sleeve also. The album is dedicated to – and named after – Kjell Bjørgeengen’s late wife who passed away only weeks before this concert. What particular instrumentation the musicians perform with – Tilbury, I am assuming, plays piano with preparations and Rowe a selection of objects augmenting his table-top guitar – is not stated. Part-way through the proceedings, there are some sounds which, to my ear, could have been generated by film projection equipment perhaps. Is this a clue? Although, I suppose Rowe or Tilbury could also easily have produced sound of this type. However, as an artist, Bjørgeengen works with video, so my assumption that I’m hearing projection equipment at all may be disingenuous and ultimately unhelpful.

In fact, in his recent book Keith Rowe: The Room Extended 1, Brian Olewnick describes Bjørgeengen’s work with Rowe as “…concentrated on creating abstract, often black and white videos involving white noise and flicker; sometimes the flickers created the illusion, in the eyes of the viewer, of phantom colours. Working with Rowe, they developed a complex interactive system, a mutual feedback loop of sorts where Rowe, using a contact mic/mini camera apparatus, would pass the device over a screen of video feed, generating sounds depending on the patterns it was reading. These sounds, in turn, would generate new video patterns in Bjørgeengen’s equipment. Clearly, this sort of constant, near instantaneous interaction created a system always on the fringes of any kind of control. It also, on Rowe’s part, “de-gesturalized” his contributions even further.”

Furthermore, in the ruminative texts on the SOFA website accompanying this release, Keith Rowe positions the idea of muteness analogous to grief, while almost inadvertently giving us a brief insight into his current practice: “…and it’s this muteness that interests me. It’s where my music has been heading for during the past decade, a mute scratching in the foreground, and the chatter and clatter of human life somewhere vaguely behind.” Interestingly, Rowe goes on: “During the performance in Stavanger a recording of JS Bach’s Chaconne BWV1004-5 (Tayiana Nikolayeva) is played, but you cannot hear it, it is silent, it is mute.” Now, Rowe is deliberately preparing material in advance of a concert with the clear intention that the audience shouldn’t be aware of it.

What is clearly audible is beautiful, subtle; expansive. For me, this combination of Tilbury’s piano and Bjørgeengen and Rowe’s manipulated sound palettes – relying as it does on close listening; an uncritical awareness of the possibilities of sound –results in an amazing listening experience. Tilbury, of course, is an absolute master of his art; his fluid piano runs are jewel-like; an elegant movement from idea to idea, which Rowe and Bjørgeengen choose to react to or not as the whim takes them. This music is not without its surprises: at 26 minutes there’s a bass hum that made me think there was a large truck outside with its engine idling and later, at 39 minutes there is a change of pitch of a mid-range tone during a quiet moment; the timing is superb. Those with a ready interest in the careers of Rowe and Tilbury will love this, of course, and most likely will have already made the purchase. I think it is a good way into the post-AMM world if you’re not familiar with Rowe and Tilbury, with the added bonus of Bjørgeengen’s approach to art; something I was unaware of until now, and something I will be investigating forthwith.