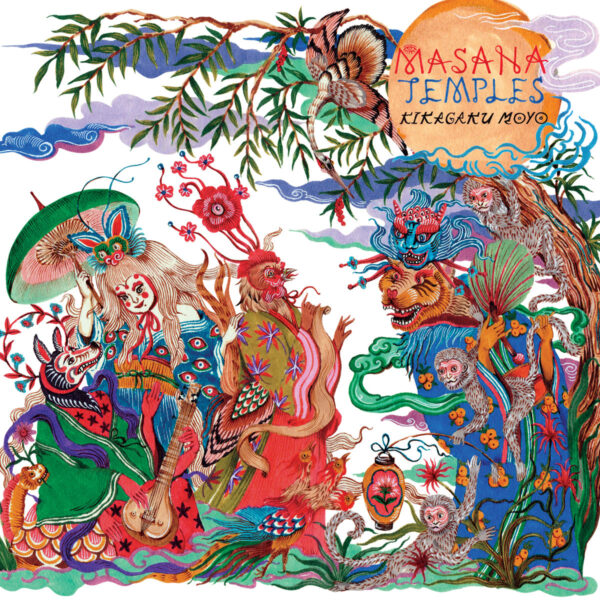 As you can see, the cover art for “Masana Temples” is stunning viewing so I figured I’d check out the music on the band Kikagaku Moyo’s Bandcamp page – the vinyl and CD copies of the album having already sold out – and what is offered is pleasant retro-1970s kitsch psychedelia. I must admit though I don’t think I can stand repeated hearings of the recording: for me this is very cheesy and saccharine Japanese folk exotica for the most part. As the title of one track cheerfully and unabashedly admits, fluffy kosmisch music is the order all the way, at least until the second last track “Gatherings” where (for a very brief moment) some truly heavy psych guitar gatecrashes the party and throws all the drinks into the air – temporarily anyway.

The band has access to all the great sounds and melodies of mid-1970s psychedelic rock and folk and Japanese folk traditions – so what does it do with them? It reproduces them in a format in such a way that it comes over as the kind of muzak I associate with recent films from Studio Ghibli (at least since the late 1990s when the animation studio began its downward slide). While the reproduction of the sounds and tones may be authentic, it sure doesn’t seem fresh and invigorating. At least the singing, inoffensive as it is, isn’t cloying and might in fact be the best part of the band’s style.

How does the cliché go again? “I came for the cover art but ended up staying for the music” – unfortunately that didn’t happen for me.