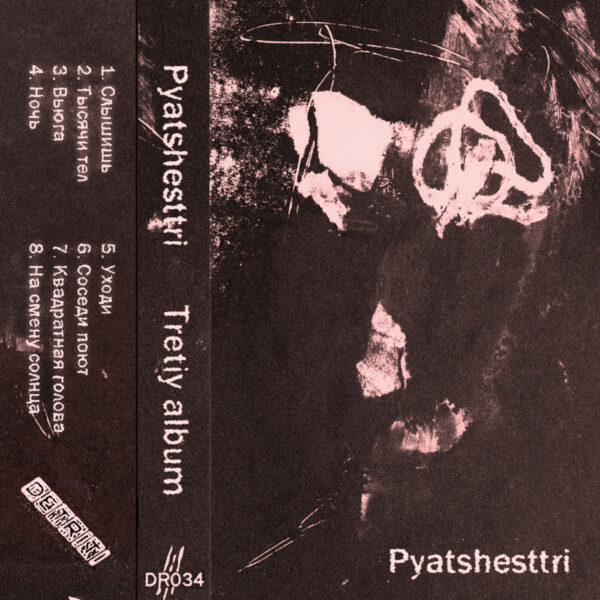 Pyat’shest’tri (the name means “five-six-three” in Russian) is one of a number of 1980s-inspired darkwave / coldwave bands currently popular in Russia and its neighbours Belarus and Ukraine. The band itself is based in Kiev and the album under review here is – if you don’t know any Russian – the band’s third. For its genre, even though that genre is highly derivative of a past musical style, “Tretiy Album” is a highly original work, dark and doomy in atmosphere, demonstrating that there’s still plenty of life and spark in the legacy left by the likes of Joy Division and New Order yet. The trick that Pyat’shest’tri employ is to bring influences from other styles and genres – one can hear elements of ambience, drone and noise in parts – to embellish the music and turn it into a very different beast, one that’s sinister, even threatening and genuinely dangerous, and highly evocative of a dark, grimy world where brutality and casual violence are commonplace.

The opening track “Do You Hear?”, all thundering drums, dark feedback drone and oppressive atmosphere, is an amazing piece by itself, regardless of genre, tightly controlled and minimal in delivery yet giving every indication that it’ll explode into danger and violence. From then on, the band is more conventionally retro-1980s darkwave with sharp barked distorted vocals, mechanical beats and minimal guitar melodies. Moments of truly dark and introspective inspiration come during instrumental breaks on tracks like “Snowstorm” which has an overall gloomy feel not far from dark urban blues. “Night” brings slight noise into the guitar to render an otherwise low-key minimalist song bleak and hellish in its ambience. The deep vocals, swallowed up in reverb and slight distortion, suggest a bleak Cold War or police state background presence. The last couple of tracks on the album combine near-industrial guitar grit, shouty singing, original background effects and sharp choppy mechanical beats and rhythms to create a true sonic universe of unrelenting post-industrial hell – in which listeners can still dance their lives away.

Even if you think you’ve heard all this before 30 years ago and much of what appears sounds no different from some other genres of bleak doomy depressive music, “Tretiy Album” has a real sense of urgency and desperation. Utter hopelessness is present on most tracks, especially in those parts where the singing leaves off and the darkness in the background starts to press on you heavily. Definitely not an album to play at your next party celebrating 1980s-era music!