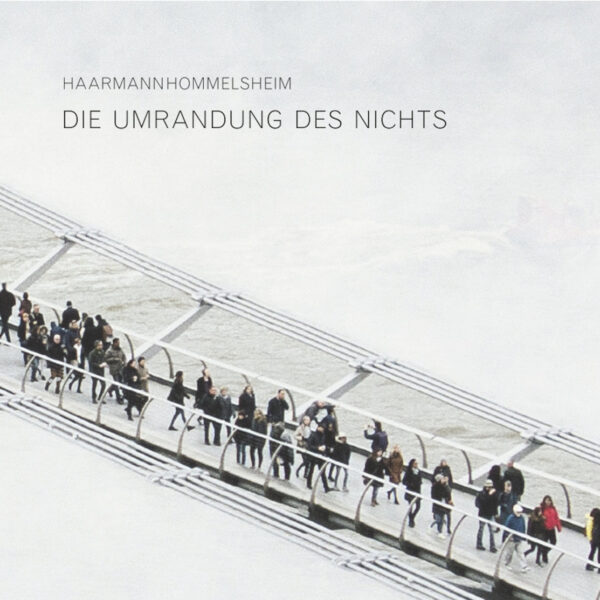 Exceptionally beautiful record of spoken-word and low-key musical jewels by Haarmannhommelsheim called Die Umrandung des Nichts (KLANGMOEBEL KCD 002), a title which translates as “The outlines of nothing”. The band name conceals two performers, the singer Christiane Hommelsheim and the instrumentalist Ralf Haarmann; Hommelsheim, based in Berlin, is an academy-trained performer and is well-known in improvisation circles, besides teaching singing and dancing. Haarmann is a composer, plays his mandolin on this record, but his main contribution is software instrument design, producing a unique species of electronica. Specifically on this album, they’re using his looping device to create “intertwined acoustic layers”, and the intention is to let each musical phrase and note to pass into this artificial echo-space, gradually turning into ghostly vapours. As this happens, we get exciting cross-waves of sound and overlapping sound-windows in these wispy layers.

I should perhaps stress the looper device is just a tool, to allow these talented players to coax their music into this shadowy zone; it’s about the concept of “creating space for the absent”, by the presence of sound, drawing negative shapes and engaging in a sophisticated form of shadow-play. Hence the title, the outlines of nothing…far from being process for its own sake, this is a tightly-integrated statement with every track contributing to the central theme, as the pair explore mysterious worlds alluded to in the texts of Gertrude Stein, as well as Christiane Hommelsheim’s own texts, which have been inspired in turn by a work of Inger Christensen. Even these texts are rendered opaque, through the performances and the method; rarely heard such an allusive recording, and I love it all the more. The cover lists multiple objects and musical instruments used in the making of Die Umrandung des Nichts, including several non-musical things such as seashells, coat hangers, and metal pipes.

If you’ve ever enjoyed No Pussyfooting – an all-time classic of tape looping performed by two master musicians – you are guaranteed to enjoy this record, except it’s so gentle and sensitive in its approach it makes even Fripp and Eno seem heavy-handed. Would be more appropriate perhaps to file it alongside records by Haco, especially Ash In The Rainbow with the echoed cello work of Sakamoto Hiromichi. Can’t say enough good things about this fine release…very unusual, beguiling, mysterious, and beautiful sound. From 9th November 2018.