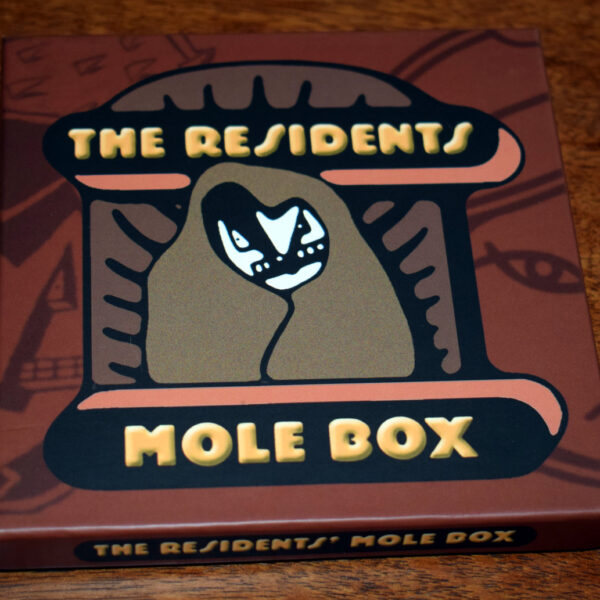 I’ve recently become a massive convert to The Residents’ The Mole Trilogy. I’ve never really been that keen on the Mole music up to now but suddenly it’s starting to make sense. Perhaps having it all to hear at once has helped. Certainly the repetition – hearing the same tunes over and over in different incarnations and versions – has pounded it firmly into my noggin. As one who loves The Residents with a passion, I’ve been snapping up every one of these Residents Preserved sets as soon as they become available. They’ve all been great, although the ones that have really made an impact for me were Meet The Residents and Fingerprince, both available in extensively expanded versions. Meet is probably one of my all-time favourite records, and hearing these earlier sketches and versions of these songs has been a revelation. So for completeness I had to buy the Mole box too, even though I was wondering if I would ever play it much and did I really need it. Now I love it. I can’t get the tunes out of my head, and I’m deeply moved by it all. You might say I’ve been “marked” by the Mole. I love the “hole” thing. I really “dig” it.

I still recall buying and hearing Mark Of The Mole. It was 1981 or 1982. I mail ordered it from Recommended Records. At that time I was a fanatic obsessive about the 1970s Residents LPs, now regarded as some sort of “classic” period, a canon of music. This would be right up to and including The Commercial Album. Yet Mark Of The Mole was an instant disappointment to me. The sound of the record was much more synthetic than usual – they had just discovered Emulators, and gone electronic / digital in a big way. No more of that electro-acoustic strangeness – treated horns and percussion – that typified Third Reich or Not Available. The tunes seemed thin and under-nourished. Evidently there was a storyline too, but it was incomprehensible to me, and nowhere near as intriguing as the Edweena story on Not Available. Even the music press were calling it “just another Residents record.” And Pete Woodin remarked to me “Here come those same old sounds again,” with a sneer of contempt. Woodin had been an influence my musical tastes (for better or worse) in a big way. He was determined that only the “early stuff” was truly radical and inventive, and that with the release of this predictable and ordinary record, The Residents were now washed up.

In spite of this, The Residents didn’t give up, and are still active to this day. Though I could sense there was something of a steady decline in musical quality after this point, I did keep loyally buying the records. If I thought the Mole tunes were thin, I hadn’t bargained on the American Composer series, where the tunes were even more washed-out and the Emulators were even more prominent. Glancing around record racks, I noted the Mole thing just wouldn’t go away and that further chapters in the ongoing saga kept emerging, many of which I ignored at the time. I forget when I heard The Tunes Of Two Cities, but even so it was hard to connect it to the Mark of the Mole, and the sense behind the conceptual whole still eluded me. Part of this was due to The Residents’ own reluctance to make coherent sense – there was and still is the “misdirection” trick, for instance raising audience expectations by continually referring to “the Mole Trilogy”, and then slapping printed disclaimers on every release that might be mistaken as part three of said trilogy.

Now in 2019, we have most (but probably not all) of the music associated with this project in a single box set, including all the studio records, two live versions, rehearsals, and even quite recent (2013) live versions of songs from this strange opera. If nothing else, we have to conclude it’s massively important to The Residents, and I suspect it operates for them on some deeply personal level. It was after all the first live set they took on an international tour. If you’ve got the UWEB paperback book 1 you can read a diary excerpt by The Singing Resident describing what an emotional wrench it was for him – all of them – to perform it, and yet what a cathartic experience it was too.

Something of that catharsis is what I’ve been experiencing these last few weeks, spinning disc after disc in this box set. I’ve now heard the same tunes and songs several times over, and now they make sense. Melodies that used to appear thin and undeveloped are now the apex of simplicity – memorable, portable, repeatable. Lyrical content which once seemed inane chanting is now emerging as strong, minimalist poetry, communicating directly with basic one-syllable words. The structure of Mark of The Mole is deceptively clever and complex, certain melodies and strains repeating like a mini-symphony. What has helped in the Mole Box is hearing the different renditions and versions; as they evolve over time, The Residents added new nuances of delivery and emphasis. The live versions vary as to recording quality and performance, one of them being clearer as to the lyrics, another emphasising the musical themes. The 1983 Intermission versions – which I’ve always liked – add new voicings, new phrasing, to the themes – along with syncopated rhythms that improve on the turgid plod of the originals. Especially relevant in this area is the ‘MOTM Mix One Concentrate’ on CD 6 – all of the music from the 1981 LP, stripped of vocals and narration, and compressed into 26 mins. If you need convincing that the Mole opera is actually a symphonic work, this is the single track that helps reveal its musical structure. And I’ve even learned to love the sound of the Emulators now. At first, it seemed like The Residents were settling for any “weird” keyboard sound they could find on their new toys; but now it’s quite clear they used the settings sparingly, and consistently. The distinctive keyboard voicings for ‘Happy Home’, for instance, are used every single time they play it, and the sound is haunting. 2

You’d be justified at this point in asking me if I understand the Mole “story” any better now. The answer is a qualified “maybe”. What mostly comes over to me now is a sense of tragedy. Most of the songs are melancholy, pessimistic, and reflect a deep personal crisis. This emotional state has been reflected in narrative terms, scaling up the personal tragedy until it depicts an entire race of people in crisis, losing their home through displacement and environmental emergencies, leading to a clash with another hidden nation of underground dwellers. The Mole thing is evidently a very convoluted metaphor, packed with symbols, which The Residents have used to express a number of themes. For starters, they themselves clearly identify with the Moles – the lives of these hard-working, secretive, underground individuals is pretty much a direct match for the entire Cryptic Corporation project. The Moles vs Chubs conflict can be read as a critique of the “normals” who tend to dominate much of the world, the comfy bourgeoisie with their mainstream culture and conventional tastes – which The Residents send up on The Tunes Of Two Cities, their détourned, satirical versions of corny jazz standards and easy-listening records which the squares enjoy. That’s a seam of satire The Residents have been ploughing away at ever since Santa Dog; the cosy family Christmas represents everything they hate about straight society. But the Mole story also hints at other themes, not all of them entirely developed or entirely successful; the exodus of the Moles is expressed using biblical imagery, Moses leading his people to the promised land, only to face enslavement under the Chubs. The enslavement part of the story is also expected to carry a critique of modern capitalism, which is quite a weight to place on the shoulders of this already over-burdened story. Then there are the more global concerns, including themes of over-population, weather disasters (perhaps caused by pollution), and the breakdown of political solutions. The conflict of the two races is never resolved, and never will be. 3

Could it be The Residents were reaching a bit too far with this story? It’s likely they thought so too, since they take every chance they can to undermine and sabotage their own efforts. Not a single performance of the Mole Show in the early 1980s went by without the story collapsing into chaos at the end – after the narrator, usually Penn Jillette in ultra-obnoxious mode, had been sneering from the sidelines, mocking the Moles’ religion, and adding unreliable comments of his own. The fourth wall deliberately demolished, self-awareness and meta-fictions running amuck. I remember witnessing all this myself when I saw The Mole Show in Liverpool in 1983. Despite all the narrative clues, and the extensive use of theatrical backdrops and moving cutouts prepared lovingly by Homer Flynn, the drama was still incredibly confusing and vague. Yet this is all largely deliberate, part of the misdirection strategy by the creators, deliberately remaining elusive and enigmatic in order to preserve the central mystery of their little morality tale. After all, the solution to a mystery is always inferior to the mystery itself. Even the annotations in this Mole Box book are very obtuse, probably on purpose, concealing as much as they reveal; although I did find it helpful to have it pointed out that the original 1981 LP could be heard as a radio play. The exasperated note printed on the back of CD 6 here indicates that, after all this time, The Residents are still no nearer completing the “trilogy” – if indeed there ever was one planned in the first place. Aye, the power of suggestion is strong.

Hardy Fox died in October 2018. It’s possible we can attribute a lot of the Mole music – and indeed much of the Residents’ musical output – to his highly imaginative and unorthodox creative skills. It took me over 35 years of listening to the Mole, Mr Fox, but now I have finally understood. Thank you.