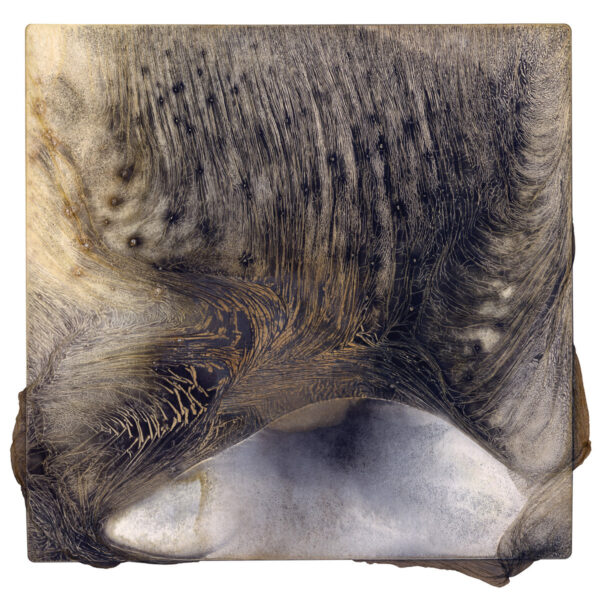 From Oakland, here’s a fab zing-zang record Light From Another Light (HUMBLER-005) offering punchy percussion, voice and electronic noise from Voicehandler, i.e. Jacob Felix Heule and Danishta Rivero. Heule has wowed us in the past with energetic performances in Street Priest, Beauty School, and Sult (who made the unusual Harpoon record with Lasse Marhaug). Last time we heard from Voicehandler was their 2015 album Song Cycle, where Danistha played her self-devised hyrdophonium instrument (mics in glass jars full of water), but she’s here today foregrounding her spiky voice interpolations, and an equally spiky electronics kit. Meanwhile our man Heule has upgraded to a full drum kit, enabling him to run roughshod over all hurdles with his lively arm-shattering antics and lively coups de pied.

Captured here are three 2017 performances done in Berkeley; ‘June 8’, on which Rivero’s voice oscillates between a CIA broadcast on a secret channel and full-blown demonic possession grunts, while Heule’s rolling snares resemble a body-massage from eighteen angry baboons pummelling you with mailed fists. On ‘June 1’, the electronics are foregrounded, creating atmospheres tinged with dread and expectation; for this chiller, Heule’s paranoid beats are the footsteps of a running man fleeing across some bleak alien zone while pursued by a fleet of flying machines. Finding much to enjoy in the way this theme is explored so comprehensively by the players, taking their time to experiment thoroughly despite the urgent tone of the piece. The abrasive burrs of Danishta Rivero are given minimal processing, yet there’s just as much compacted energy as you get in 25 Merzbows. On ‘May 25’, Heule’s work is more disjointed, scattershot beats and disconnected rumbles gradually build a scaffolding in the air, while Danistha’s efforts give us the promised “blurred lines” where we can’t tell voice from electronic noise, and everything streams out in a delirious babble of chaotic spew.

For those who enjoy loose and raggedy performances with plenty of zest and zeal, this is just the ticket. Brittany Nelson’s cover artworks are starting to grow on me too. From 26 November 2018.