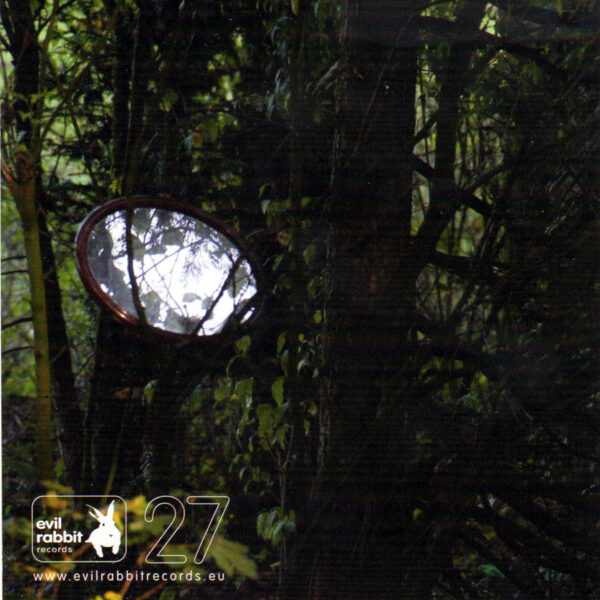 Trio Blurb turn in two excellent long tracks of string-and-voice glatteroon on their W (EVIL RABBIT RECORDS ERR 27) album recorded at live performances in 2017 and 2018…it’s Maggie Nicols and Mia Zabelka playing with John Russell, and it’s not often in history of these situations that we get a gender balance tipping this way. Nicols from Scotland is someone who I’d pay to hear recite the alphabet, if we could arrange that; she’d find a way to turn each letter on its head, print it sideways and dip it in a new colour scheme. For sure it’s about note production, making unusual sound, as much as hitting a free-form note with the delicacy and grace of a spider’s web and “playing” tunes with her body that Leroy Jenkins would have killed for, but it’s also about her imagination, finding ways to insert unexpected information into the playing space that must make her a sheer delight to see on stage (well, in fact I know very well that is the case). Even on these two recordings there are precious seconds where she takes the piece out the back door with an unexpected snatch of popular song. This kind of thing may seem “wacky” to some unenlightened listeners, but it’s a great way of throwing the audience for a loop with a curveball in the corner pocket.

John Russell is a veteran of UK improv since the 1970s, and has often played with drummer Roger Turner and was a member of Chris Burn’s Ensemble; few guitarists can match what he does for light and nimble picks, even though he does back-pedal into the “Bailey mode” more than once on this set, especially with the strummed harmonics. Still you need to be light on your metal limbs if you intend to keep up with these two women players, who scuttle like crabs on a sea of lard. Mia Zabelka from Austria has been a firm favourite with this listener ever since her 2012 M album rolled into the catchment zone, and every subsequent release has revealed new dimensions to her super-charged violin that amaze these grey ears. While I realise that it’s pretty idiotic to praise the “speed” of a musician’s fingers (if done too often, we’d end up finding something of value in Rush albums), I have to start somewhere when discerning Zabelka’s gifts. It’s as though there’s so much information she needs to convey (particularly on the high-spirited ‘Work And Wild’ cut here) that she has to work twice as hard just to cram it into the available space. Accordingly, her fingers, arms (whole upper body) go ever so slightly crazy with her efforts. But instantly the music transcends all that effort, and everything emerges as natural streams of sounds of an intense, frightening beauty. She vocalises too, by the way.

This German label with its generic hole-cut sleeves may have a “cute” name, but it’s been pretty darn reliable in bringing home the roebucks when you need a good score of contemporary acoustic improvisation in your veins. From 28th November 2018.