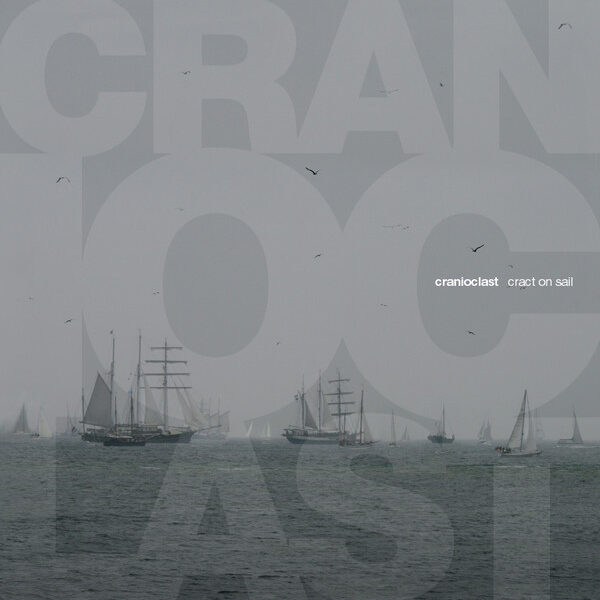 Cranioclast are these mysterious German droners who have been at it since 1985, issuing low-profile LPS and cassettes in a rather sporadic fashion…indeed I suspect a lot of people thought they’d called it a day after the end of the 1990s, then this Cract On Sail (AUF ABWEGEN aatp56) LP suddenly hove into view. One of their trademarks is that every LP title is an anagram of their name (one favourite is Kolik-San-Art), and nobody knows who they two members are because they masquerade under two further such anagrams, Soltan Karik and Sankt Klario. I have brushed my eyebrows against some snippets from their back catalogue, but these limited run items are hard to find and their emblematic cover art doesn’t give you any clues. It’s almost inevitable that their music would gravitate towards the Auf Abwegen label in Cologne, well known as a magnet for such close-lipped minimal showbiz stars like Marc Behrens, Column One, Asmus Tietchens, and Illusion Of Safety.

On Cract On Sail, we’ve got a cover of sailing ships that would make any sensible person immediately think of Nosferatu The Vampyre, arriving at Whitby Bay to establish his evil network of castles, and consequently the whole LP carries this charge of approaching menace, an unstoppable malign force ploughing towards us at full sail. Cranioclast achieve this with guitars, synths, machine-programmed beats, noise, processing, and assorted aggressive swipes…and manage to achieve a great take on that odd “klonking” rhythm that’s been a favourite with many listeners since the glory days of Metabolist. It’s the kind of beat that owes virtually nothing to the rhythms of Can or even Neu!, and instead marches forwards in a rather awkward manner, like an otherwise healthy creature with braces strapped to all four legs.

The other thing Cranioclast are doing here is telling an episodic “story” across two sides, and while the music is continuous the titles read like book chapters for a terrible fantasy novel with science-fiction elements. ‘Congress of the Space Archaeologists’ indeed.. ‘The Arrival Of The Space Frog’ my eye…but one has to approach these elements with a sense of fun, does one not? In all, the musical details here are very compelling, the “suite” keeps changing with as much dynamic energy as the B-side of Pink Floyd’s Meddle LP, and Cranioclast’s skills in studio assemblage are not to be questioned. Their use of distortion is particularly juicy, real instruments are being played, and there’s an undeniably physicality to the sound which you don’t get from your cissy laptop brigade and their libraries of virtual aural wallpaper. Were it not for the somewhat gloomy atmosphere of this album – they do seem to have a touch of gothic-industrial in their DNA which they can’t shake off – I would recommend this to lovers of the proggy-exploration mode, such as Gong or Steve Hillage. I say this to remind you (and myself) that Cranioclast do have their “rocky” side, clipped and restricted though it be, and it’s not exclusively about foggy atmospheres and mysterious meander-fests in the rivers of dronery…though I have previously mistaken these Germans for a sort of Teutonic Zoviet-France, I will make this mistake no more. From November 2018.

Title for this blog post from the American poet George Sterling (d. 1926).