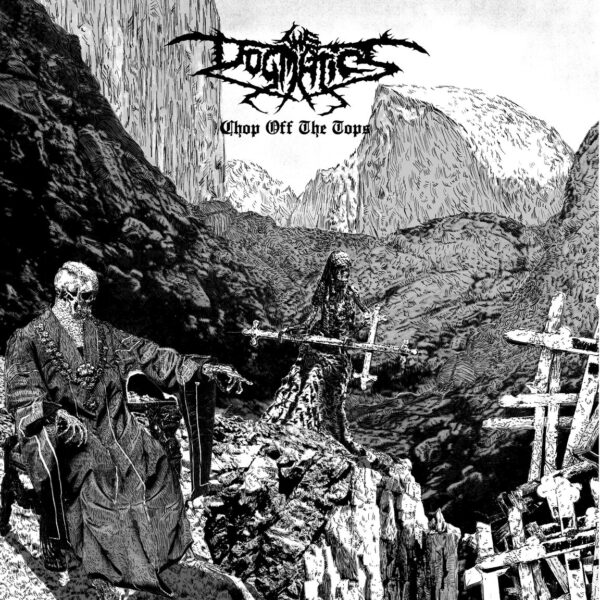 Second LP Chop Off The Tops (SELF RELEASE, NO NUMBER) by The Dogmatics is another impressive set of mysterious, slow clarinet-and-piano tunes from Chris Abrahams and Kai Fagashinski. Their debut The Sacrifice For The Music Became Our Lifestyle was issued by Monotype Records in 2012 and seemed on the surface to be like a form of jazz of free improvisation done in a subdued and slow-moving manner, issued of course with an LP cover that made it look like a Black Metal album. I’m not so sure about anything now, as it becomes gradually clearer with this Chop item that they are doing something rather private and personal, for reasons of their own, and it might not even have anything to do with music.

I learn now they’ve been collaborating since 2007, which is 12 years ago, and they didn’t do it in a public space but in someone’s kitchen where there happened to be a piano available. I know everyone likes to say they’re undertaking a musical “exploration”, and that theme does indeed surface more than once, but on this occasion the Dogsters have won their stripes by keeping it under wraps and possibly evolving a secret code, a bond between the two which only they can share. I am all in favour of such secret codes. We are always worse off for finding out things like the real names of The Residents or the actual meaning of the letters AMM. Part of the Dogeroos’ cabbalistic mission is, I would hope, locked into these odd track titles such as ‘It Never Yielded Results Which They Had Failed To Discover By Other Means’, a sentence every bit as cryptic as that which you’d find in a recipe book used by alchemists in the 16th century.

As for the cover art – once again in the Black Metal style and once again penned by Zev Langer – there are more hidden clues than on the cover artworks for Led Zeppelin IV, and you could use it as a map to find the Philosopher’s Stone. Musically and sonically, you can expect hermetically-sealed statements whose baffling simplicity makes it impossible to apply the jeweller’s chisel of the mind, yet these phrases are deeply satisfying; the notes of Abrahams shine like small diamonds, while Kai’s clarinet blows mists of ancient time around the room. At all times there’s a poise and precision in the playing that most musicians would give their ribcage to possess. Lastly there’s the title of the LP itself, which as I typed it out just now suddenly revealed itself to be a zany pun on Top Of The Pops, a phrase which is most meaningful to anyone who can remember that lamentable and long-running chart hits show on the telly in the UK, but which evidently carries a resonance across the rest of the world too. It’s all part of their genre-bending plan, issuing an austere instrumental record as though it were an inverted million-selling item.

‘Death Is Now Your Friend’ is the parting shot of The Dogmatics, to which we can only reply with a silent hand gesture of assent. From 19th October 2018.