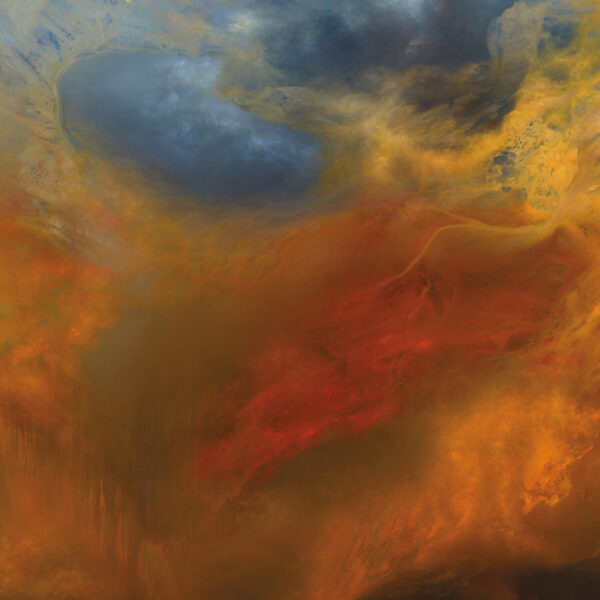 After three years with no studio releases from Sunn0))) – their last studio release being “Kannon” which I’ve yet to hear actually but apparently was given the thumbs down by their fanbase – the duo are storming back with two studio releases in 2019, of which “Life Metal” is the first. Compared to past studio-recorded excursions, this album features Sunn0))) returning to their basic sonic foundation, of exploring heavy droning sound within a guitar-dominated, metal-based music genre and discovering what that exploration reveals. As fans of Sunn0))) already know, that exploration has taken Sunn0))) men Greg Anderson and especially Stephen O’Malley on many musical paths together and individually, frequently in the company of collaborators from metal and other genres. On reconnecting with their roots and recording a work with a much stripped-down sound and presentation though, Sunn0))) have brought out a much different world from what they had presented on previous albums: “Life Metal” is a much warmer, uplifting and reassuring work than the grim soundscapes from albums like “Black One”. At the same time the sculptures and soundscapes carved out on this album are huge, dense and above all vast, stretching out in time and space in ways that can only be described in terms of geological aeons. The guitar drones can still be abrasive and brutal but light and even softness are present at the same time.

First track “Between Sleipnir’s Breaths”, book-ended by brief homages to 1980s Swedish metal band Bathory in the samples of parts of “Oden’s Ride over Nordland”, goes straight into the familiar riff-cutting and sound-sculpting business in which shards of light and radiance are revealed. One surprise inclusion in this track is Hildur Guðnadóttir’s fragile chanting vocal: she quotes two stanzas of a poem by 15th-century Aztec ruler / poet / philosopher Nezahualcoyotl, followed part of a poem by his contemporary, the priest / poet Ayocuan Cuetzpaltzin. These verses revolve around a theme of the transience and fragility of life, and the Creator God’s attitude to living things and their purpose for existence. Do they exist purely for the pleasure and whims of the god or gods that create them? Not surprisingly perhaps, the track does not offer an answer as it rides away on the eponymous eight-legged steed of Germanic mythology. Perhaps follow-up track “Troubled Air” can partly answer the question posed: it can be a monumental and overwhelming beast but, buoyed up by Anthony Pateras’ pipe organ playing, it rises gracefully into the heavens and floats slowly and steadily but surely towards the source of the universe. The mood is calm and serene and the atmosphere is filled with grace.

“Aurora” sounds and plays rather more like the Sunn0))) of yesteryear with rippling guitar tone abrasion accompanied by plenty of crunch and grit sailing by in a majestic manner. For a slow-ish track, “Aurora” is actually very busy with guitar tones almost merging into noisy power electronics or ambient industrial in parts. “Novae” is even more heavily textured with raw guitar sound carved up into weird rock shapes with jagged edges that eventually will be smoothed down over long stretches of geological time. The raw sound judders and shudders, and shakes into something chunky with severe jagged edges and plenty of grit, sand and twigs hanging off the monster.A strange entity seems to emerge from the continuously flexing and mutating guitar lines, one that is reaching for the sky, perhaps to be reunited with its maker. Hildur Ghuðnadóttir makes another appearance, this time playing electric cello and haldorophone: the result seems rather more tentative than it should, the Icelandic musician’s instruments erring on the side of caution and tiptoeing around the guitars when perhaps they should be booming over the droning rhythms.

The soundscapes on this album are incredible to hear and experience: dramatic, jagged, with drones soaring majestically to the firmament with peaks of shrill guitar feedback and diving to scoop out huge slabs of densely bristling sound, leaving large valleys and gulfs behind. The music is rich and gritty yet it moves and flows very easily, with the assurance of over 20 years’ worth of drone doom exploration and discovery. The attitude behind the album is positive and uplifting, and radiant light abounds in all four tracks in spite of the melancholy of the spoken lyrics in the first track. I think in the years to come, “Life Metal” will be seen as one of Sunn0)))’s best recordings.