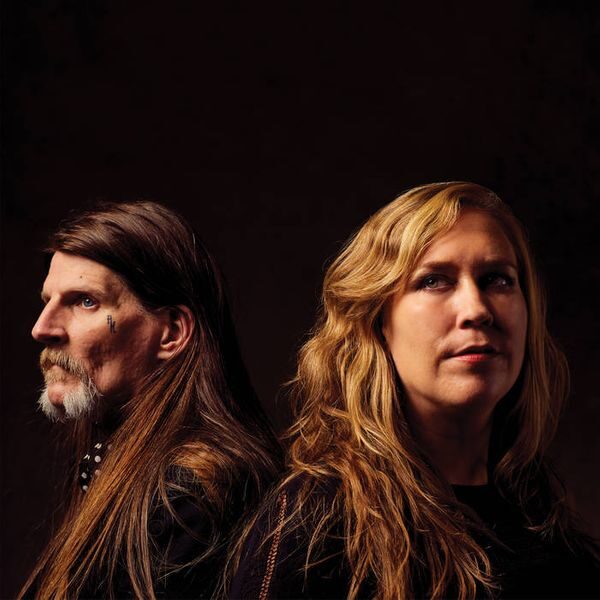 After taking a long detour through dark musical Morricone-influenced soundtrack territory starting with “The Bees Made Honey in the Lion’s Skull”, continuing with the “Angels of Darkness, Demons of Light” pair of albums and culminating in the almost pop-friendly, even sing-along “Primitive and Deadly”, Earth have returned to their roots in minimalist riff-based doom rock, peeling right back down to their core guitar-n-drums instrumental template. As always with Earth, what Dylan Carlson and Adrienne Davies give listeners initially seems fairly straightforward, even basic, but the tone of the music, its languid pace, even the spaces between the sounds and the bare-bones atmosphere surrounding the music itself – to say nothing of the track titles that revolve around a theme of a mysterious “wise” woman with witch-like characteristics and preoccupations – hint at something much deeper and more complex from which the music emanates.

Opening track “Datura’s Crimson Veils” sets the style, atmosphere and pace for the rest of the album – it’s slow and steady yet proceeds with a light touch and ends up being surprisingly busy with new riffs (or new variations on repeating riffs) coming into the music right throughout to the very end. On top of that, second track “Exaltation of Larks”, though following a similar style and structure of repeating riff upon repeating riff, seems very different in mood and tone almost to the extent that a different set of musicians might be playing this piece. The atmosphere is slightly lush and the mood is dreamy; this is a beautiful track that makes its point quickly and is gone before the full import of the message it leaves behind can be absorbed. The third track “Cats on the Briar” is different again in mood and this is a pattern that repeats through the album.

There are several good pieces on the album: “Exaltation of Larks” is one such early highlight and the slightly experimental “Descending Belladonna” with its unexpected stops and starts and the interludes in-between that reveal another, underlying and hidden sonic universe is another. Another short track “Maiden’s Catafalque” is a brooding, slightly sinister creature though it could strike listeners as a quietly sorrowing, contemplative elegy given its title. “The Mandrake’s Hymn” may come as close as an Earth composition can possibly come to melodic pop-friendly territory with surprisingly memorable riff motifs but a certain quality in the crisp drumming pulls it back towards darkness. “A Wretched Country of Dusk” has a stark quality tempered with a slight feeling of yearning and wistfulness in the long singing lead guitar solo. Even those tracks which did not impress me as much as others boast riffs and melody lines that carry an ambiguous quality which, depending on your mood perhaps, can seem either slightly sinister or just po-faced business-like.

Though all ten tracks are very slow, they never ever sound as if they might be on the verge of falling apart and that’s due in large part to Adrienne Davies’ precise and placid drumming: always soft and unobtrusive in contrast to Carlson’s dominant guitar yet unerring, and with its own surprises particularly on “Descending Belladonna” where unexpected cowbell dings, cymbal shimmer and other percussive puff add an intriguing tonal layer.

Earth may have returned home with a stripped-down work of doom guitar minimalism, and yet while much here sounds familiar, it sounds very different at the same time. The album makes its own demands on the listener’s patience, not just in the fact that it’s a slow recording, but in the fact that the very slowness in the beats, the rhythms and tones allows mood, atmosphere and ambiguous nuance to bleed out and make an impression on the listener.