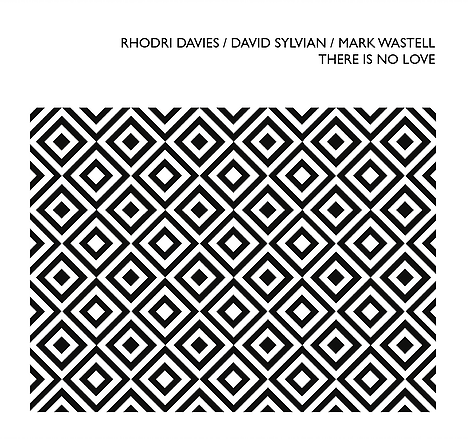 Having lost out on the previous Sylvian artefact on Mark Wastell’s Confront label, Playing The Schoolhouse – his collaboration with Jan Bang with contributions made by Toshimaru Nakamura and Otomo Yoshihide – not once but twice (due to my own tardiness, admittedly); panicked, I bought There Is No Love at the beginning of the year direct from the Confront website on the very day it became available. Five months later, a copy for review plops onto the doormat. So I’ve already had a good long time to formulate a coherent opinion on this record? Yes? Yes… Actually, I’ve been finding it hard to formulate a coherent opinion of this record. I should say I’m still finding it hard. Why is that? Is it because the way Sylvian works now seems so different from what he has done before? Different even than his recent projects with London improvisors? Maybe it is not so far away from Uncommon Deities, his 2012 collaboration with Jan Bang, Eric Honoré, Sidsel Endresen and Arve Henricksen, where he narrates text in a similar way. Perhaps Playing The Schoolhouse provides a link that I’m not currently aware of. On initial listens to There Is No Love, I actually found it a little hard to listen to. That is to say, I found it challenging to listen to, rather than unpleasant. Far from unpleasant. And I must say I wasn’t necessarily expecting a challenge. The upfront way Sylvian’s voice is mixed; the fact that he talks not sings; apart from repeating the title phrase “there is no love”, he recites text by Bernard Marie Koltès. Like everything Sylvian has put his name to in the past, it is great to listen to, but: the content is unsettling, confrontational; mildly uncomfortable in places. And that in itself startles and surprises me.

“Koltès’s work, based in real-life problems, expresses the tragedy of being alone and of death. His writing style accents the dramatic tension and the lyricism of his plays.” – Wikipedia

Rhodri Davies and Mark Wastell start proceedings, with bright, held tones. It is six minutes before Sylvian’s first utterance of the phrase “there is no love”. It subsequently reappears here and there, sampled and triggered by a machine or app of some sort; possibly processed after the fact. Two minutes later, Sylvian begins to recite the Bernard Marie Koltès text. This in itself is a physical shock on first listening – Sylvian’s voice is mixed unexpectedly loud. Rhodri Davies is credited with playing lap harp, table harp, vibraphone and radio. Sylvian with voice, vocal treatments and electronics. Wastell utilizes his tam tam augmented with cracked ride cymbal, chimes, Indian temple bells, singing bowls and metal chains. Interestingly, a recording of Wastell playing tubular bells and concert bass drum made at Surrey University in 2006 is also utilised. And Toshimaru Nakamura completists will be keen to learn that a 2012 recording of him performing with his no-input mixer in Montreal, Canada is also integrated into the work. All this material-gathering creates a dense matrix of sound and seems typical of the way Sylvian likes to work these days. By choosing to involve himself with Wastell and Davies, he has placed his ouevre in two pairs of very capable hands. Indeed, Wastell is credited with “compositional structure” which involved arrangement of pieces of recordings made at very different times and places. Sylvian committed his voice to tape in LA in 2014; the main instrumental parts were recorded in February 2017 in London, and then, taking into account the additional parts by Nakamura recorded by Sylvian and Steve Bates in 2012 as well as his own material from 2006. A sonic jigsaw.

Ultimately, it is hard to separate Sylvian, a man with a career in music that spans five decades – perhaps professionally, a recluse of sorts these days? – from his own pervading charisma. There is a mystique there that he, like others such as Mark Hollis or Aphex Twin, have arguably used to their advantage. The interest in experimentalism that he has developed in the latter part of his career is still based upon the saturation of the pop sensibility of his youth. Those of a certain age will remember how avant-garde much of Japan’s sound seemed to be in the early 1980s.

As a post-script, I’ve just learned that Mark Wastell performed There Is No Love live with the One Day Band – Wastell on percussion, Jennifer Allum and Mandhira de Saram, both playing violin and a disembodied David Sylvian via his pre-recorded vocal part at Raven Row in East London – at the end of 2018. I would have liked to have seen that. Perhaps it will happen again in the near future? Keep your eyes peeled.