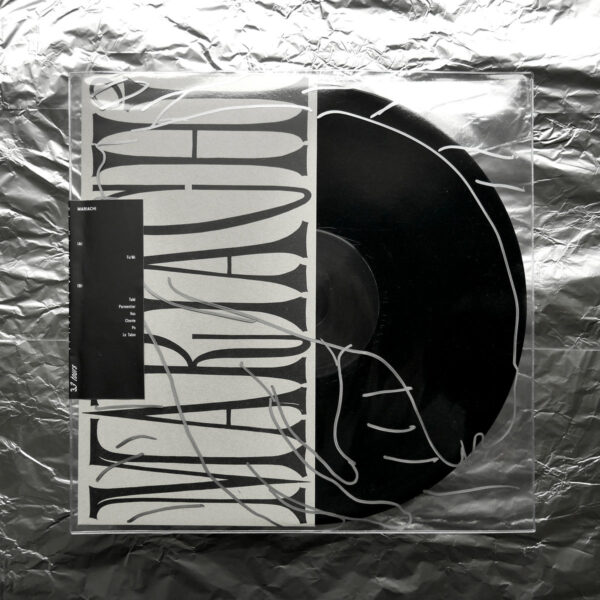 Stupendous solo electric guitar work from Mariachi on her self-titled LP (DOUBTFUL SOUNDS DOUBT 18 / NO LAGOS MUSIQUE NLM 28)…this is Nina Garcia of Paris who also plays in “no wave no noise” band Mamiedaragon and has played duets with trombonist Maria Bartel and drummer Augustin Bette. Two sides of gorgeous free-noise await the happy purchaser of this solid slice of tapioca, issued in a clear wallet with hand-drawn scrawls in silver pen and a wrap-around card spine thing…a package which somehow makes the music itself more directly accessible through its very transparency…on side A Mariachi sets out the stall with one long track called ‘FuMi’, wild gestural sweeps and sawing actions, bumping the strings for percussive effect, sinking into stoner-doom episodes of deep depression…or else simply letting rip with loud abstract roars of solid black. Jumping about like a fried rattlesnake bean, this 20 mins delivers like a payload of smack to the system…flip it over for six shorter massages of the ear (some of them lasting mere seconds) where Mariachi tries out further crazy what-if experiments, and through a combination of intuition, boldness and sheer luck she ends up hitting the target with every poison arrow.

I think what I enjoy here is the sheer abandon, no attempt at structure or shape, just a pure love of making a sound and moving the hands, like a painter besotted with colours. She’s evidently capable of doing things that 100 conventional guitarists would be horrified by, even if they dared think of them. She’s also in full control of the amplifier’s volume, allowing it to slip the leash like a wild panther or ocelot when the occasion demands it. Although a pedal effect is also used, there’s not much distortion going on in this ballpark, and her tones (though loud and fierce) are clean and sharp, ready to mow down a forest of hardwood trees as surely as any axeman’s blade. I only wish more free improvisation records had as much body, blood and juice as this full-bottomed tiger-beast. Now I really must try and hear her cassettes for No Lagos Musique and Cool Girl Records, plus there’s also a Mamiedaragon LP called Météo Chérie which I wish to add to my feedbag…another highlight of outré ferocity from Doubtful Sounds, home to the genuinely hot talents, freaksters and outsiders of Europe. Great! From 14 November 2018.