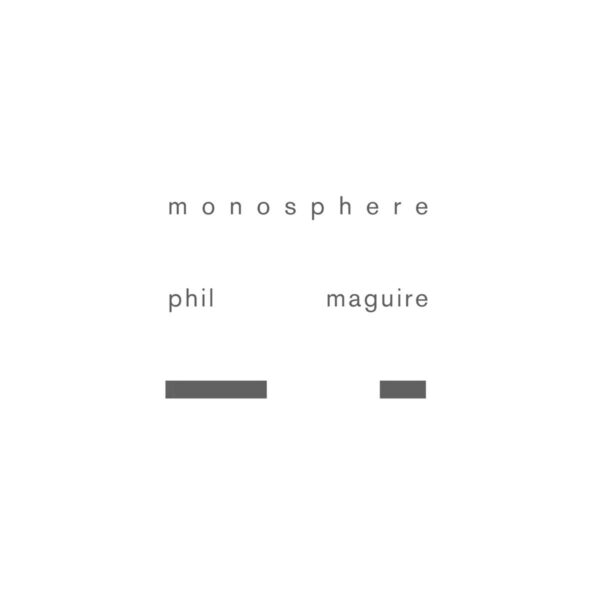 Here’s a cassette by Phil Maguire, sent to us from Finland by Edward Trethowan and released on his Tavern Eightieth label (sometimes printed as TVEI). We’re at the second small-run pressing for this tape and at time of writing there are only five copies of that left.

Monosphere (tvei28) feels like such a fitting title for Maguire’s reduced, sealed-off ultra-minimal work that it’s almost surprising it hasn’t been used a thousand times before by other lower-case operators, but then not all of those space cadets have the same concerns that Maguire has, what with his nose stuck in computer source code on the one side while exploring the surface of a proton with his other left-handed fork. Even the track titles here evidently have to be “descriptive” of the work in a way that would keep a clinical scientist happy when they’re preparing their report, hence we have the terms ‘Iteration 1’ and ‘Iteration 2’. This is all computer music, so I suppose that term has extra meaning in that context. Every time a developer runs a routine, they call it an “iteration”? Probably not. On this occasion, Phil remains staunchly proud of his “inhuman and unpredictable dynamics”, which sounds like we ought to be in for a wild listen, except that the music is extremely quiet and tuned so low you’d need to be two mice with a stethoscope to stand a chance of even perceiving it.

Already you can probably tell we’re quite some way distant from “music” as most people try and compose it when they have a laptop in their mitts and are bent on releasing another electronica masterpiece into the multiverse. But we’re also far away from many of the process-artists who release stuff for winds measure recordings and the like, who may take an interest in micro events like a human hair brushing against a soap bubble, but at least they live in the real world. Maguire’s Monosphere requires us to enter a completely non-human space, so tiny in scale that even Ant-Man would blanch, and a place where all occurrences are governed by rules we cannot fathom. Arrgh. Well actually this isn’t such a grim listen, once you get used to the odd pattern of light droning tones (some of them almost like music) alternating with utterly abstract drone-i-tones that cause small waivers in the fabric of the skin’s continuum, or something like that. At times I almost thought of the world’s smallest church organ being played by the world’s smallest microbe, who had curiously stumbled into the building and decided to experiment for itself on this monstrous instrument by smashing its minuscule carapace up and down against the keys.

Don’t forget to check out Phil’s own Verz Imprint label if you have an appetite for more of this. From 3rd December 2018.