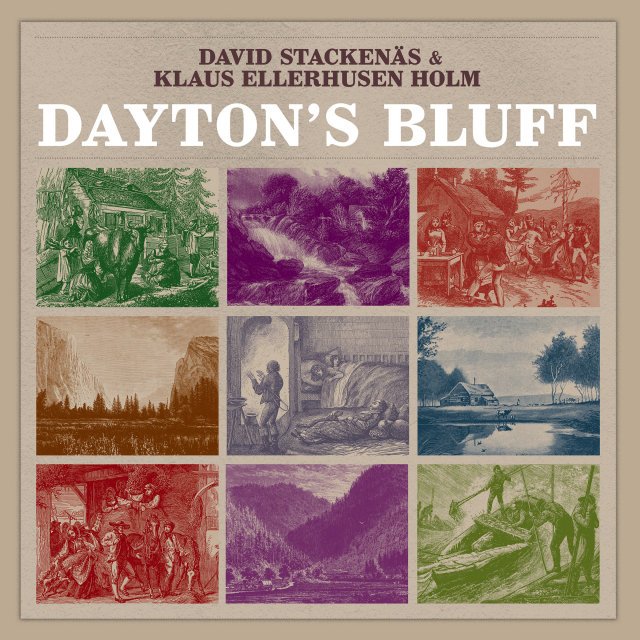 Appearances, as we all know, can be deceptive. This album, from Scandinavian pickers and hooters Stackenäs and Holm, comes with folksy woodcut cover art, plaid-shirted performance photos and track titles like “Swede Hollow” and “Phalen’s Creek”. All of which might lead you to expect a down-home collection of Appalachian ballads and reels, or a Nordic version of American Primitive guitar sounds.

And you’d be wrong, sort of.

Instead, at first listen, you’re presented with seven tracks of gnarly, scratchy, desiccated free improvisation, where clarinet and saxophone wander through atonal guitar chords, spidery plucking and icy harmonics, and those rubbing and stretching sounds that suggest a disconcertingly physical approach to the instrument. The first two tracks were recorded live at Blow Out in Oslo, although, as always, the audience are conspicuous by their absence. Perhaps they were just sitting in awed and reverential silence. The remaining tracks are studio pieces, but continue the same deeply textured approach.

So far, so good. My first thought was that I liked the generally quiet and subdued atmosphere. It’s refreshing to find improvising musicians who explore that end of the musical spectrum, rather than just brewing up a racket, thrilling as that can be.

Things get even more interesting on subsequent listens, as I feel that the chaps have worked a cunning double bluff and that this is a folk record after all. There’s a pastoral feel to these tracks, albeit in the sense that “The Crucible” or Robert Eggers’ “The Witch” are pastoral – isolated and distressed rural communities in the midst of a wilderness struggling with the dark forces of their imaginations. Even on the most abstract tracks, it sounds as if there are folk melodies trying to punch their way out. This is either folk music as it was before human beings learned to play instruments, or folk music as it will be when civilisation collapses and we’re all fighting mutant cockroaches in the radioactive ruins.

Or, to put it more cheerfully, imagine Ornette Coleman and late-period John Fahey providing the soundtrack for an Oliver Postgate animation about early Puritan settlers fending off trolls and witch cults in the woods. It’s as charming and as disquieting as that.