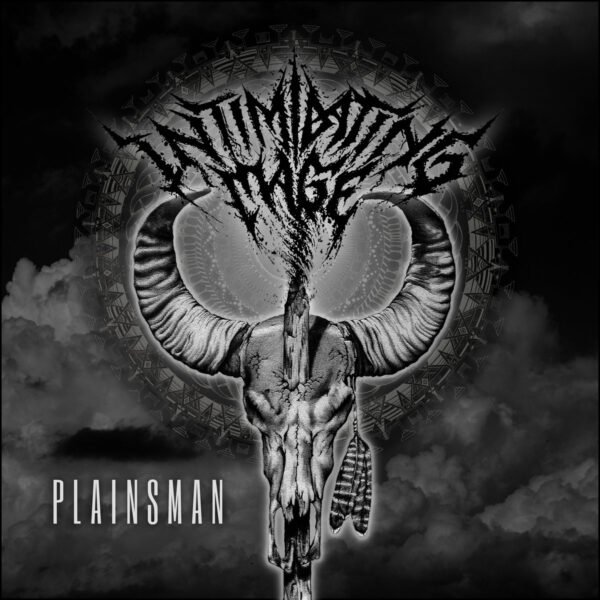 From Boulder in Colorado comes this furious horde of … two guys, Max de Vicenzo on drums and Mage on everything else including vocals, delivering an angry message of destruction and Nature’s revenge upon humanity trapped by its beliefs in false gods, false prophets and false religions. As far as I can tell, Intimidating Mage is a fairly new act and “Plainsman” is the debut album – though I’d say, judging from the way the musicians play together, they’ve had plenty of experience playing death metal, maybe also blackened death. They must have also composed a fair amount of music for past projects, individually, together or with other people, as the songs on “Plainsman” boast varied melodies, riffs and rhythms, and all of them are tight and structured well.

Opening track “Plainsman” explodes with all the righteous fury of a mob hellbent on vengeance against too many lies and falsehoods they’ve had to endure and for which they’ve already sacrificed too much. The song takes listeners through a bewildering range of moods from insane frenzy to intense brooding melancholy, revealing vast abysses of sinister and dark atmosphere within a brief 4-minute playing time. From here on listeners are taken on a wild race led by a combination of blistering guitars, constant driving blast-beat percussion and insane demented gravel-throated voices through some terrifying and rugged blackened death metal territory. At least the music is clear in an airy way and the madcap rush through and over zigzag riffs and melodies is balanced out by passages of runaway melodic metal that occasionally is spiced up with lively, even cheerful rhythms and sparky lead guitar outbursts.

Nearly all songs are fast and boast so much variety in their pace, rhythms and melodies that they tend to merge from one song to the next – they could do with a bit more individuality by having one or two distinct riffs or other music motifs that repeat at the beginning and the end, and help to unify the songs in which they appear. “The Last Song of the Seraphim” breaks away from the fast-n-furious template by being a mostly spoken track with deep sinister ambience. With so much technical virtuosity in most tracks, the duo could have stretched out the songs for another minute or two and included some improvised instrumental breaks. I also have the impression that Mage’s vocals and the music are continuously fighting for attention when one or the other should be allowed to dominate.

The cover of the Bathory song “Equimanthorn” seems unnecessary in an album already packed with good original songs that straddle the extreme metal underground and alternative mainstream. I suspect the cover may have been included to help shop the album to labels that might be interested in picking up the album.