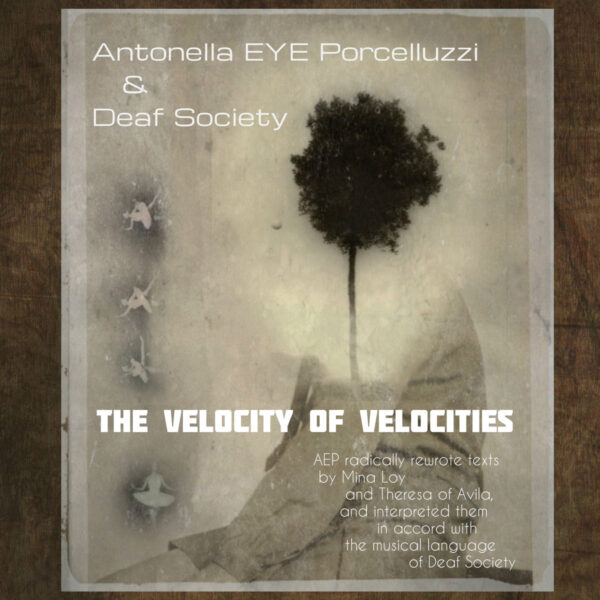 Unusual spoken-word and electronica album…The Velocity of Velocities (OPA-LOKA RECORDS OL 1805) is a collaboration between Antonella EYE Porcelluzzi, who supplies the texts and voice, and Deaf Society (i.e. Ivan Murlika), who supplied the music. Porcelluzzi is a poet and film-maker from Marseilles who also produces music albums, and there are a number of releases with lyrical titles such as Chanson D’Amours Tristes and L’Oiseau A Bxl available on her Bandcamp page. For this item, she drew inspiration from two feminist outsiders of history – the British artist Mina Loy, and a 16th century Carmelite Saint Teresa of Ávila.

Loy appears to have been an overlooked genius (poet, painter, playwright, novelist, designer) who was a contemporary of Ezra Pound and T.S. Eliot, and her very original works are only just beginning to gain recognition and appreciation. As to the Spanish nun, she was canonised as far back as 1622, and was an active reformer in her own lifetime, but I suspect Antonella EYE Porcelluzzi is mainly interested in her theology and her precepts, one of which is called “mental prayer” and is characterised by devout concentration or contemplation. It was this advanced line of development which has earned Saint Teresa the “mystic” epithet, possibly aligning her with other famous women mystics of the medieval church, such as Julian of Norwich and Hildegard of Bingen.

The importance of The Velocity of Velocities is the way in which the ideas of these two exceptional women has been recast and redirected for a modern audience; Porcelluzzi isn’t simply selecting texts and re-reading them, and in fact there has been a radical rewriting process involved. I would like to think she is compressing salient highlights and weaving elements together to produce strange, new statements; she may be making connections between the works of Loy and Teresa (connections no academic would dare to even conceive), but she is also channelling their spirits and possibly supplying new concepts of her own. Lastly, there’s the way in which she intones the texts, aligned impeccably with the mysterious low-key electronica of Deaf Society, producing a total effect which is extremely compelling. One feels that deep secrets are being imparted, matters of great import. Even if words are occluded or inaudible (her voice rarely rises above an urgent, grim murmur), this too is undoubtedly part of the plan.

To further this sense of glimpsing the truth “through a glass darkly”, we have Ivan’s cover art. Which involves cutting and manipulating early photographs, and on this occasion – a figure in profile whose head is strangely replaced with a glowing tree silhouette, while tiny ballet dancers float in the background – he has achieved a puzzling, surreal image on a par with the work of Joseph Cornell. Very good. From 10th December 2018.