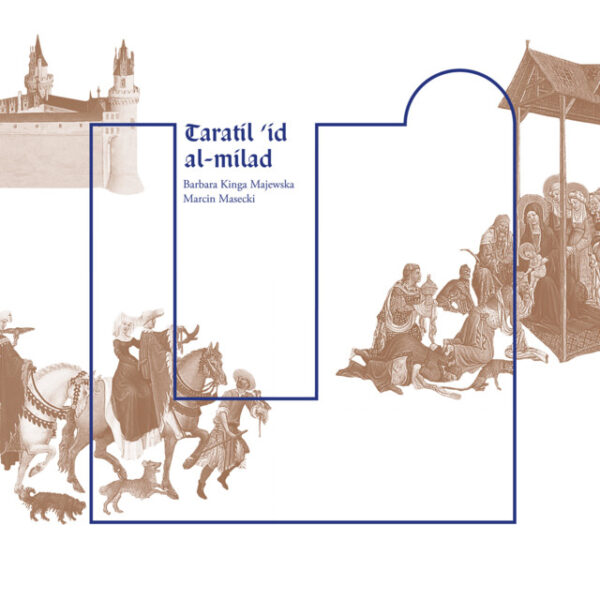 You wait years for an album of obscure early Christmas Carols reinterpreted in an avant-garde context, and then two come along at once…well, almost. We recently noted the unusual record by Bipolar Explorer, a NYC shoegaze band whose Til Morning Is Nigh: A Dream Of Christmas recast old carols into a modern “dreampop” idiom and also used spoken-word narration to present the familiar Nativity story in a slightly ambiguous manner. Today we have Taratil Id Al-Milad (BOLT RECORDS BR 1051), a concept record devised by Barbara Kinga Majewska and also a showcase for her singing voice, realised with the help of Marcin Masecki who supplies the instrumentation (mostly piano, also some cembalo and other keyboards).

Crucially, the carols are old traditional Polish Christmas songs that have been translated into Arabic. The purpose and cultural resonance of this action has been dissected and analysed by Pawel Mosicicki in the enclosed liner notes, where he discourses at some length on the history of carols, the meanings of the Nativity story, and the implications of the statements of Majewska and Marcin. If I understand all of this correctly, Taratil ‘Id Al-Milad is intended as a critique of xenophobia. The modern world is in complete disarray. Wars, natural disasters, and internal conflicts have escalated the refugee crisis into epic proportions, creating situations which no country is prepared to deal with. Certainly not mainland Europe, at any rate. The current Brexit muddle that is tearing my own country apart is but one symptom of a much larger catastrophe in waiting; apparently our national response to it is simply to dig ourselves in even deeper, breed and encourage more hatred of foreigners, and deny immigrants any opportunity to settle – all of this naked intolerance disguised under the euphemistic phrase “control of our borders”.

It is this global problem, arguably one of the big issues of the day, which has inspired Taratil’ Id Al-Milad. The creators use ingenious strategies to convey their meaning. Firstly, the meticulous translation of a European language into an Eastern language shows, at a single deft stroke, how it is at least possible to integrate human discourse between otherwise divided continents in a meaningful manner, and also communicate something of value thereby. Secondly, the Christmas theme reminds us of one of the core meanings of the Nativity story; Joseph and Mary were refugees, Christ was looking for a place to lay his head, and it’s possible to read the story as applying to the fate of many migrants today. What does that say about us Europeans as a so-called Christian society? One question this album may be asking is about simple human compassion. Lastly, there’s the way the songs are delivered: sad, resigned, melancholic, longing for a time when we were perhaps more complete as human beings, quite unlike the self-serving and competitive culture of today. It would have been possible, I suppose, to make a record seething with anger and spleen at gross social injustices, but instead Barbara Kinga Majewska sings with dignity and sorrow, and Marcin Masecki plays stark, forlorn piano notes of icy beauty. Beneath this apparent stiff composure, there lies great emotional truth, compacted into well-constructed taut songs.

And so – even though this listener can’t understand a single word that’s being sung (no libretto or translations are provided), the meaning of this metaphor is shining plain to see. This record ought to be required listening at the UN High Commission for Refugees! From 4th December 2018.