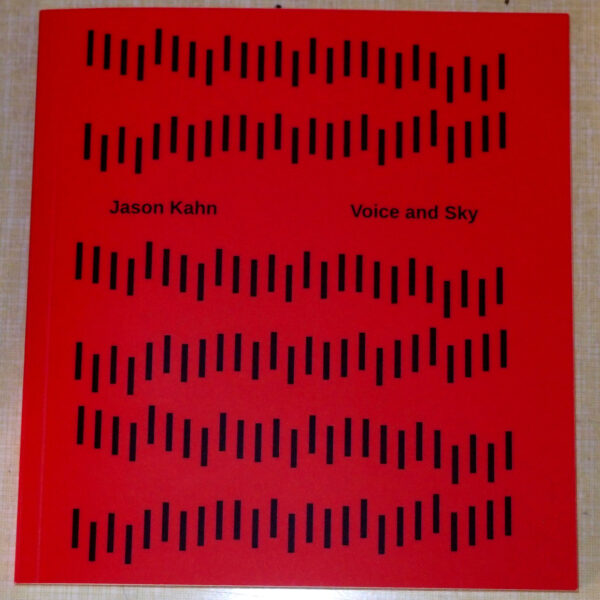 Published by Kahn’s own imprint, Edition, Voice and Sky is a dazzling, shiny new collection of recordings of Kahn in varying locations expressing himself through the medium of the lungs. As an intriguing bonus, this cd is packaged together with a generous volume of texts. These texts are not just about locations that are familiar or local to Kahn – he has written about places like that before, for example in his book In Place published by Errant Bodies Press in 2015 – they are actually about a specific intensive period of time spent working in the mountains east of Zurich.

As you might expect if you are familiar with his work, Kahn operates more as an artist than a musician, saying of these documents, “…but one of the points of this whole journey was less about my actual presence in these individual places than my awareness of them…” and, “They have no meaning other than serving as a reflection of my place in a certain space at a certain point in time.” These quotes are taken from the self-penned introduction to the book. As well as putting the work into a context, this introduction also allows Kahn to reference some specific concerns in his work, in particular “…erosion of awareness…” In addition, there are ten colour photographic plates illustrating the artist’s rambles in the mountains, and one of his art installations in a mountain schopfe, or small barn, which go some way to put the work in context.

Kahn tells us that Voice and Sky is a development of a piece of work called On The Breeze – a series of “public space interventions” and a sound and text-based installation – which was created from “…material gathered hiking extensively through the Swiss canton of Appenzell Innerrhoden…” The text itself is presented as free verse almost, or short prose poems. Kahn’s practice takes in painting, installations and writing as well as music and sound. There’s a really nice steady pace about his writing which leads you through his experiences and theory in a very natural way. Like a sonic travelogue; each new publication – in whatever media – simply and effortlessly adding the next building block to his body of work. Kahn has a wealth of experience simply listening – an activity he clearly relishes – and he is keen to share his world with us. Here’s an example:

In the distance / cowbells like / hollow echoes / until the bird / cries again / filling the forest / with an ancient / melody.

Turning our attention to the accompanying disc of twenty-seven fairly short and to the point recordings, it is apparent that Kahn makes these pieces in a variety of locations; on a train, next to a fountain, in a cemetary, inside a chapel, and even under a cable-car station. “Fountain in Town of Appenzell” is intriguing in that Kahn has managed to close-mic both the cascading water of the fountain and his own larynx. “Cemetary Outside Pfarrkirche St. Mauritius, Town of Appenzell” details Kahn’s trudge along a gravel path to seat himself on a bench accompanied by his own self-modulated expelled-breath grunts. Conversely, “Between Hoher Kasten and Staubern” is a vocal wail interspersed with the sounds of nearby insects and the distant noises from the town from one direction and possibly livestock from another, carried by the summer breeze. In a beautiful, unplanned moment, “Near Sämtisersee” features an almost gamelan orchestra-like collusion of cow and/or goat bells. This is the kind of thing Kahn interested in: happenstance, serendipity and happy accidents. Me too. As with all of Jason Kahn’s output; this comes highly recommended from me.