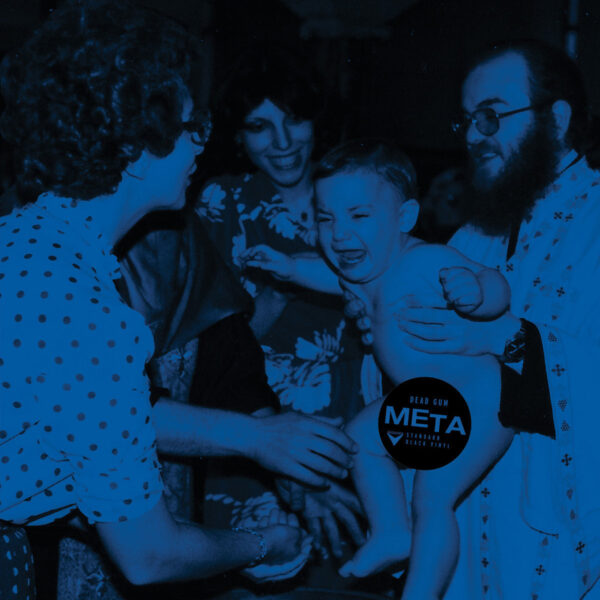 Greek player Panagiotis Spoulos has surfaced here now and again, mainly for his solo act Dead Gum – we heard the vicious doom-noise cassette Fake World in 2009, and before that he made Loops Flew Over the Cuckoos Nest for Editions Zero which we noted in 2007. He also played guitar and sang for Wham Jah on their Wham Jazz CD. There have been quite a few cassettes and CDRs from Dead Gum over the last ten years, most of them released on his own label Phase! Records in Greece, but only one actual vinyl LP – 2014’s Gainer, which we are invited to use for purposes of comparison with today’s 12-incher, Meta (BW33) released on the Italian Backwards label.

The main difference is a more nuanced approach – Gainer was apparently something of an attention-seeking shouter asserting Spoulos’s right to be heard, while Meta is about “layered, ambiguous narratives tracing an impossible duality”. What this means is more variety in the styles of playing (mostly done with guitar and vocals), unexpected use of sound effects and field recordings, loops and repetitions, distorted singing and sampled voices…in terms of the music, Mr. Gum veers between an attenuated, highly-distressed form of garage punk rock, where he sounds like an utterly wasted adolescent junkie warming himself over a candle flame in winter; and outright doom-influenced, semi-industrial noise that relies on heavy amplification and obnoxious foot pedals. Both of these modes work just fine for me, as do his other varied approaches to setting up walls of alienation and pain. There are some experimental short-ish tracks such as ‘Excerpt from Ghost Tapes’ and ‘Hold Onto You’ where he just sounds defeated, baffled by the impossibility of everything. I particularly like ‘The Art Of Self Sabotage’, a lengthy sojourn in the swamps of doubt which makes very effective use of “layering” – the few simple elements are arranged just so, creating an illusion of spatial depth through its foregrounded and background elements, and there’s a real sense of control over the noise components, especially the surly, brooding guitar swipes that threaten to erupt into violence at the least provocation.

While some of these techniques might not be entirely new – at times it seems Dead Gum would have happily co-existed with such 1990s guitar-based hell-meisters from the post-industrial fallout as Skullflower, Cosmonauts Hail Satan and The Dead C – Panagiotis Spoulos has a style all of his own and a unique take on the sheer hellishness of everyday existence. “A peek into a baffled brain,” to continue the description from the florid press notes, “a rove around…muffled alarm calls and grimy smells.” 300 copies were pressed of this vinyl LP, released at the end of November 2018; we received a CDR promo on 21 December 2018.