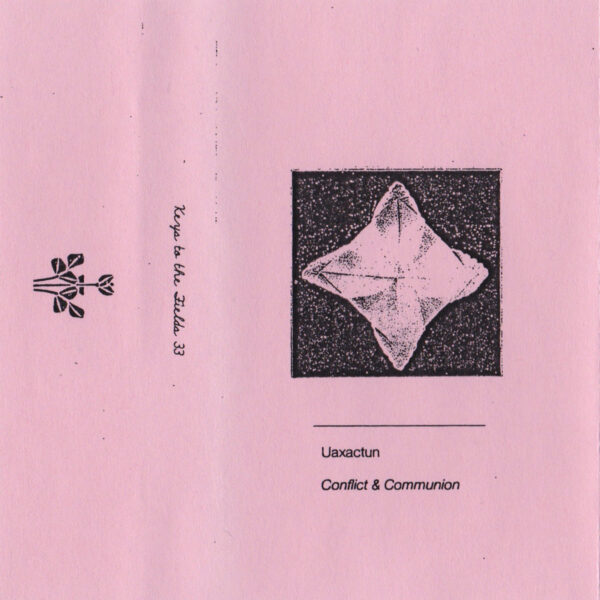 Based in Maitland, a small city about 100 kilometres northwest of Sydney, Vienna Press has been releasing cassettes of ambient / drone / industrial / electronic / sound art music since 2016. The act Uaxactun’s recent release “Conflict & Communion” is the first Vienna Press recording among others I’ve come across so for that reason I thought I’d review it as a way of introducing TSP readers to a new cassette imprint. On initial listening, the music appears very low-key and modest – and the hissy quality of the tape does not help either – but on repeated hearings “Conflict & Communion” turns out to be a surprisingly dramatic and powerful dronescape work. The first half of the recording is slow and quite minimalist in its repetitive droning, steadily laying down a solid foundation of low and deep tone in the way farmers might continuously shovel layer after layer after endless layer of mud and soil on a lake bed and pack it all in by growing plants with deep root systems until the lake bed is converted into solid farming land. Only about halfway through the first track does something different start to happen and it’s both light and clear in tone and fragile in quivering timbre. As a new prolonged tone is added, the music gains a clearer and more sustained focus. At last a melody develops in the last few moments of the piece (untitled by the way) before it disappears into white noise.

The second track (also untitled) starts as a darker, even sinister piece, rich and strong in tone, and very eerie in mood. The piercing drone is complemented by a repeating loop of what could be electronic string melody. As the track progresses, the melody loop blossoms into quite a radiant and benevolent piece, adding other repeating loops along the way and growing in confidence and volume. While there are two or three sound loops all apparently competing for the listener’s attention at any one time, the whole result actually sounds very harmonious.

It may be an unassuming work on a thirty-minute cassette but on repeated hearings of “Conflict & Communion” you’ll discover rich chthonic treasures of musical diamonds compressed from base materials. The hissy tape background does not help the clarity of sound – I do think this work needs to have a very clear background – but it does add to the sense of this recording being a precious discovery lurking in the depths of the current alternate music underground.