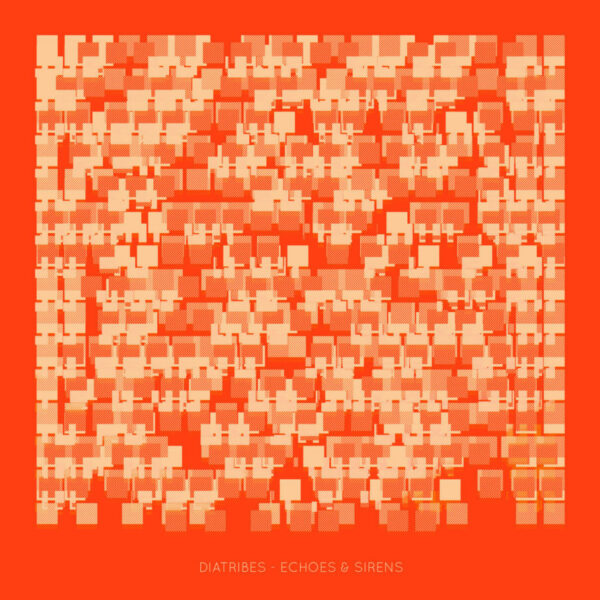 The new LP by Diatribes is explicitly intended as a direct continuation of the ideas on Great Stone / Blood Dunza, which we noted in 2015, and which was an experimental, minimalist take on dub music, specifically the work of King Tubby. Now on Echoes & Sirens (AUSSENRAUM RECORDS AR-LP-011), released on the same label and with a similar abstract cover, the duo of Cyril Bondi and d’incise have expanded the project to include bassist Raphael Oris, and a four-piece of horn players – including French player Bertrand Denzler on the tenor sax, himself a very extreme composer and improviser in minimal modes.

In pursuit of their conceptual aim, this LP refers directly to sound systems, especially that of Jah Shaka – a famed roots-reggae sound system owner-operator who’s been doing it in SE London since the late 1970s. Accordingly we are presented with four formal compositions representing the heyday of dub culture from the early 1980s, tagged with suitable titles such as ‘Dub Fire will be Burning’ and ‘Don’t Trouble I (Oh No)’; the aim is to take all the constituent parts of a dub sound system (bass, vocals, horns, rhythms, delay, reverb), break them down in an analytical manner, and replay them in these very abstract, experimental forms. Even the sound of the party crowd, rescued from actual Jah Shaka dub parties, has been captured and replayed here as samples, emanating in patchy bursts from the electronic set-up of d’incise. The plan is that we gain “new auditory perspectives” from these stripped-down, re-assembled versions of dub.

It’s a very strange listen; I would call it diagrammatic music, as though the idea of music had been rebuilt in schematic form, by aliens visiting planet Earth who had nothing else to work with as a blueprint except for a few moments from Lee Perry’s ‘Vampire’, which survived on a broken seven-inch. Unlike real dub, there’s not enough bass, the drums are determined to be as minimalistic as possible, the horn section appear to be using charts written by Tony Conrad, and nobody really swings or lilts. Melodies are sketched-in, suggested. Most frustrating of all is the way that no piece really gets started, since the rules of the analytical game they’re playing apparently demand continual pauses for self-examination. Even the promised “earthquake-like” qualities of Shaka’s sound system are not delivered by the weedy, timid sound (though the bass player is trying his best).

However, none of these reservations may matter a jot, as this is not intended to be mistaken for dub music or experimental music; I think the process that’s relevant is the structure of each piece, and the way the players explore tensions and silences within it. On the other hand, I suspect if you’d tried saying something like this to Jah Shaka, the chances are he’d have laughed you all the way from Brixton to Islington. From 10th December 2018.