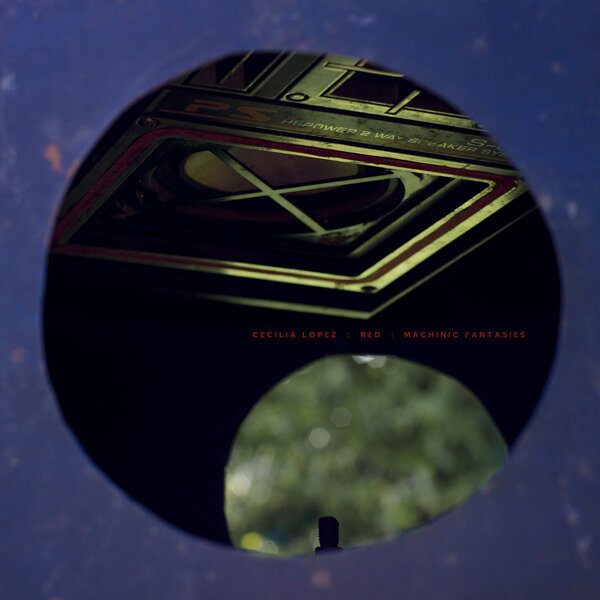 From the New York label XI Records here’s a two-CD set Red / Machinic Fantasies (XI 140) showcasing the work of Cecilia Lopez. Lopez is from Buenos Aires and her work is respected internationally, with performances at various festivals and contemporary art exhibitions. I’m getting the feeling she’s more of large-scaled multi-media person than a conventional composer working with bars and staves, and her interest lies in sound-generation and installations. This aspect is clearly shown with the first disc here, five pieces issued under the heading “Red”, all exploring aspects of her unusual web-like set-up.

There are a few photographs of this installation piece printed here, but they don’t give you a sense of the scope and ambition of it. The web is made of red cables resembling something like the industrial-strength net-thing they use to haul cargo off a ship. Inside this web are suspended a number of small speakers and microphones. When everything’s hooked up and it’s turned on, feedback results when the cables sway back and forth in the performance space. In one of the photographs, Cecilia Lopez might be controlling the feedback emissions to some extent, using the now-ubiquitous mixing desk and tabletop array; and there may be synthesizer tones added into the mix somewhere. Over a long duration, the work unfolds quite slowly from what is described here as “an evolving feedback network”. Quite nice; I like the unusual and innovative method for sure, and the fact that serendipity plays an enormous role in sound production (and indeed determines the shape of the whole thing). It certainly works well on the long piece ‘Desastres Civiles’, which feels like a mournful radio broadcast with its plaintive tones, hums and whines; and its drama reveals itself very hesitantly, in fits and starts. In one sense there’s no real beginning and end to pieces like this, and the work of Lopez is akin to making something hidden (like an iceberg perhaps) surface for a while, then disappear again. The other four pieces weren’t as compelling to me and began to appear like rather ordinary exercises in process art – tone generation, ordinary drones, textures. An exception could be made for ‘Larga Distancia’, which has a forlorn and desperate flavour which I quite enjoyed, again resembling a radio signal, trying to make its way through a snowstorm.

The second set “Machinic Fantasies” is somewhat different in approach, and shades more into the area of performed music (or performed sound art). The basis of it is her rotating oil drums – two of these big boys are hand-rotated and spun around in the space (and indeed two performers are credited with this task). Loudspeakers sit inside these drums; through them, Cecilia Lopez plays back her found sounds, field recordings, and electronic emanations from her electro-acoustic instruments. These sounds don’t exactly have a smooth passage into the ether, having first to pass through numerous cut-out holes in the drums, performing the job of filters; and things are changed to an even greater degree by the mics placed in the arena, which may sometimes amplify a sound as the drum swings near it. Add to this the droning trumpet and trombone of Joe Moffett and Christopher McIntrye, and the interaction of moving bodies with the sounds in space, and you have the situation for 73 minutes of ‘Machinic Fantasies’. All of this seems incredibly promising, yet I found it disappointing; not an unpleasant drone, but lacking in force, shape, and direction, and this despite the fact that everything is carefully scored and directed. The process and set-up has the potential for an exciting, unpredictable sound-generation event, yet no sparks fly, and the results are listless and ordinary. Like “Red” above, this is mostly about process for the sake of process, and very little is gained by extending it for over an hour. From 22nd January 2019.