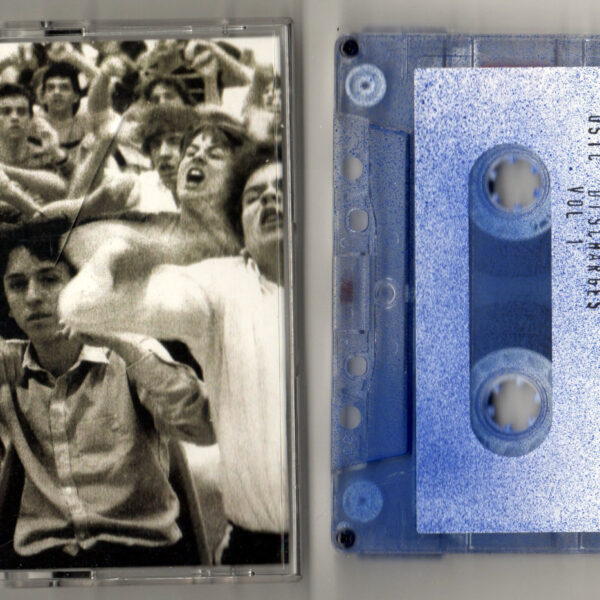 Here we have dsic with Discharges Vol. 1 (LF RECORDS LF070)…I’m personally happy to see him release another cassette, of which the last one we heard was 2014’s Negative Approach I think…the format seems to suit him somehow. On Discharges it has allowed him to create what appears as a single long-form discourse, an unbroken meditation on depressing and miserable matters. Sometimes with the CDR format there’s the temptation to crate individual “tracks” for the consumer’s ease of use. Discharges is done with computer, effects and systems, and is mostly abstract electronic sounds treated with reverb, echo, filters…and other stuff I just don’t understand. It’s both linear (a long line of grey and black noodling in the mind) and layered, things happening together in many places.

Another thing I like is that he seems to be playing down his usual “violence” in favour of more considered, detailed noises…sounds which resonate and vibrate in more interesting ways, suggesting landscapes and skies, leading us to places rather than setting up a man-trap of concrete blocks and barded wire which might crush our bones and shred our soft hide. Even so there’s an implied violence lurking in every second of this powerful grindery, an energy which is being directed in fascinating and unusual ways. Meanwhile dsic’s own website hype for this tape exceeds all expectations, with a long shopping list of extreme states of mind and commentaries on the human condition…my favourite being “intense fluctuations in energy and emotional and intellectual plasticity”…it’s quite ambitious to try and offer all of that through digital sound and computer music, but dsic is aiming high. It’s also incredibly long, and you can’t stream it on Bandcamp! Very good! From 12th February 2019.