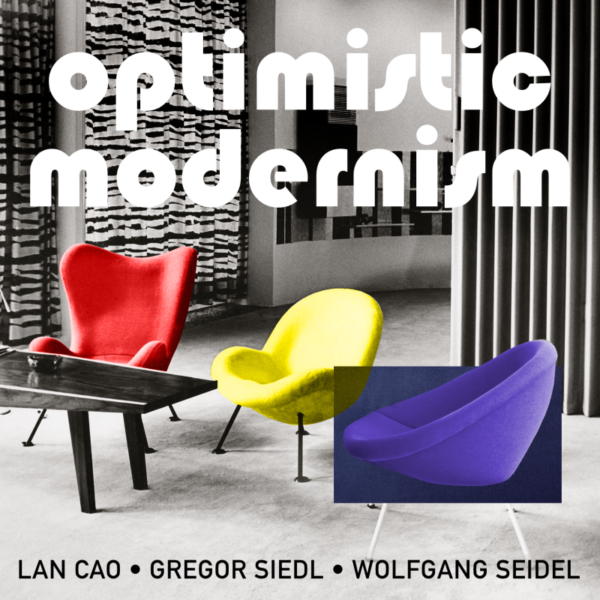 Intriguing set of low-key and offbeat music, which might as well be designated an updated form of “electro-acoustic improvisation” since it features a healthy balance of acoustic and electronic musical instruments, from the trio of Lan Cao, Gregor Siedl, and Wolfgang Seidel. The eight pieces of enigmatic music on Optimistic Modernism (MOLOKO+ PLUS 102) were recorded at Exrotaprint in Berlin, a choice of location informed by the theme of the set – about which more shortly. Of the three players I’m especially taken today with the work of Lan Cao. She’s already moved away from her conservatoire classical training basic from Cologne and Brussels, so although she’s a pianist of supreme technical skill (I assume), she’s now all about the sound production. And what an imaginative approach she has to that. Here, she plays a sampler, a synth, and something called the Marxophone. In other performance contexts, she has also banged amplified objects together, experimented with “low-tech” electronics (hopefully things like broken circuits), and the prepared zither. With these unconventional techniques she has already built an international reputation at festivals, tours, and workshops and through her groups Swiss Army Wife, Junk Orbit, Parallel Asteroid and Zicla. Perhaps it’s Lan Cao’s intuitive grasp of sound-shapes that is leading the direction of the music on Optimistic Modernism; there’s something intangibly different at work here, and I seem to be hearing an innovative (though understated) approach to music and sound generation in a group playing setting, one based on pure intuition and feeling, following a strange logic.

But I don’t mean to diminish the contributions of clarinettist Gregor Siedl, the Viennese player who’s got slightly more of a jazz bias; and it so happens he plays in at least two of Lan Cao’s groups named above. If he brings the jazz sensibility to the picnic, he also reins in any tendency he may have towards “free playing”, abstract-impressionist puffs, or the blurtish blasts of an Archie Shepp. Restraint is the key word in his notebook, though he’s not as unbendingly rigid as some austere players currently operating in contemporary minimal / reduced improv. The clarinet can be a warm instrument and Seidl brings that warmth. Wolfgang Seidel meanwhile is a veteran Berlin drummer and has been bashing them skins since the mid 1960s, doing it in German groups who were influenced by British beat combos of the time. Impressively, he also turned up at the famed Zodiak Free Arts Lab and struck up a buddyship with Conrad Schnitzler. For some, this alone would make him a crucial part of the Krautrock jigsaw, though the reality is always more subtle than working through simplistic lists of fave records or bands that start and end with Can and Faust. For instance, I’ve never heard of the German rock group Ton Steine Scherben, but they made a string of records starting in 1971 with Warum Geht Es Mir So Dreckig, and had a left-wing political agit-prop dimension to their ranty work not unlike Floh De Cologne. Well, Wolfgang Seidel was an original member of that group. Bear all this in mind as you savour his clipped, to-the-point percussive attacks; though remember this isn’t a “jazz” trio, he’s not a timekeeper, and he also plays the table-top guitar, and the synth.

As you warm to the mysterious but compelling music of these three gifted individuals, feel free to leaf through the substantial booklet of words and images inside the slipcase. It’s making a load of tendentious points about “modernism” in design, starting with the buoyant mood of the 1960s, and the bitty essay inside might be musing on some pessimistic observations about how everything turned out badly since then. The idea is that design can influence society’s thinking in some way. The points are illustrated with photos and adverts for genuinely strong and striking pieces of design, especially for furniture and buildings, which are then juxtaposed with American magazine ads for big cars with happy families. I’m still not sure what the message is here, but it’s certainly written from a rather sour, disenchanted, Marxist-leaning point of view. The choice of location for this record, the Exrotaprint building, is part of the overall schema. It closed at the end of the 1980s, but when it was the Rotaprint factory it used to make printing presses for use in schools and universities. The implication seems to be that the production of much politically radical and activist literature was enabled thereby; the chain of thought is no Rotaprint, no Situationist pamphlets and posters, no May 1968, that sort of thing. The lack of intellectual rigour displayed in this flakey argument has failed to convince me, and the use of sketchy associations and mental impressions is not a good way to make a concrete provable point; but I enjoyed the music. From 26th February 2019.