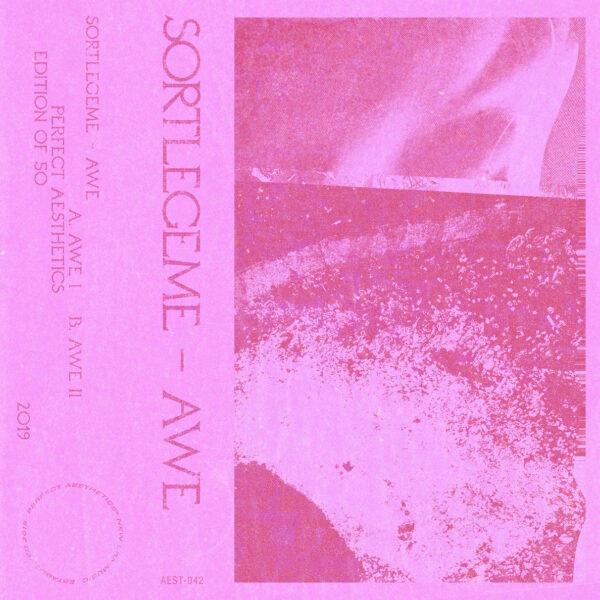 As far as I can make out, Sortlegeme is a project that has been active since 2016, the year when recordings were first released under that name, run by a musician whose other project is Outer Nothingness which has been active since 2009. “Awe” is Sortlegeme’s third album, and the act’s first release for the Russian label Perfect Aesthetics: a most appropriate home for this recording of heavenly and highly immersive ambient drone noise soundscapes. The pink cover is very visually arresting too, though maybe not for the right reasons – it’s perhaps too pink for my liking!

The music creeps up on you quietly but once it makes its presence felt, it holds you spellbound with a warm radiant sheen that is spread over the entire work from start to finish. The music may be blurry and any edges it might have had initially have been smoothed over, though it does have its moments where the drones may be slightly ambivalent with regard to mood and underlying rhythms and effects sound as if they need your full attention in case they bite when you’re distracted by something else. For the most part, the album is rarely less than benign: even in its later moments when bristly noise froths up and the ambience becomes cold, suggesting a vast ethereal outer-space scenario where electromagnetic and radio waves pass continuously, I find the music not really unfriendly at all.

My impression is that the music should be more or less continuous but the cassette format forces it into two parts, and “Awe II” is definitely the warmer and more powerful and cohesive of the two tracks. The drones seem more focused on a distant objective and the radiant sounds have a rich quality all their own as they undulate and twist around one another. Different soundscapes pass smoothly one to another and an imaginative listener can easily make up his/her own story-line of what could be happening. In parts of the track there is an exploratory mood, as though the music itself is fascinated by how it is unspooling and curling up again, only to repeat, on the tape as it plays.

Maybe the music isn’t as original as it could be – among other instruments, the analog synthesiser has been through its squiggly paces before countless times on other people’s recordings – but still, it sounds so grand, majestic and triumphant as it soars heavenward and out into the universe yonder. The layered textures become complex as scraping sandpaper noise combines with organ drone, atmospheric radiance and a pulsing effect to form a mighty spaceship that cruises from one star system to the next.

For a recording at less than 40 minutes, “Awe” has mighty aspirations to be a soundtrack for a major film or television series in which mighty fleets of spaceships patrol sections of galaxies and their crews are worshipped as gods by inhabitants of the planets they visit.