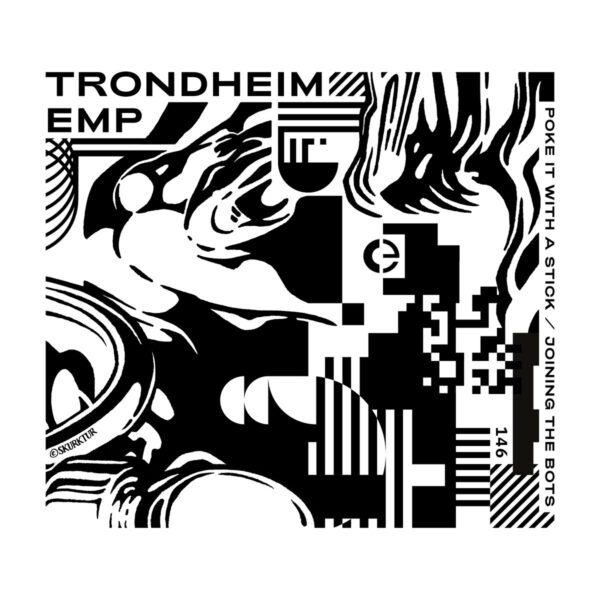 Trondheim EMP is more of a “project” than a conventional musical group; its full name is Trondheim Electroacoustic Musical Performance, it’s led by Øyvind Brandtsegg, and it’s based at the Norwegian University of Science and Technology. Even the players on this double CD set might not be musicians exclusively – they’re a mixture of performers, researchers, and philosophers. The release Poke It With A Stick / Joining The Bots (CRÓNICA 146-2019) represents the fruits of their efforts to date. It’s mainly meant to showcase the innovative technique that Brandtsegg and his crew have developed; he calls it “cross-adaptive processing”, and it’s an elaborate means of getting one sound to influence another. It’s been scaled up and fed back into the live performance situation, so that the actions of one player can influence the performer or the person next to them, presumably all in real time.

None of this is especially new. Keen readers will know that Faust, for instance, with the help of Kurt Graupner, did a tremendous amount of radical work with their pedals and boxes in the studio in the 1970s, to aggressively change the sound and actions of their fellow musicians while they played, producing some incredibly wild results on the tape. As a working method, such interplay has been one of the building blocks in Onkyo, EAI, and indeed many other forms of group improvisation since the late 1990s. Kaffe Matthews has done real-time processing of live environments with her sampling and treatment system LiSa since 1997. Anne La Berge and The Maze Ensemble recently did it with MaxMSP on her Raw LP (see this review), allowing musicians to vary the course of the music through pushing buttons on a computer. Indeed, there are so many examples of live processing happening in contemporary music that it’s now pretty much part of the standard operating mode. I would have liked to see at least some acknowledgement of this culture, an understanding of the history of the approach, in the booklet notes to Poke It With A Stick; instead we get a rather self-congratulatory tone, and the dubious claim that “cross-adaptive processing in performance offers new and exciting challenges most especially for improvisation – these two albums are just the beginning” (my emphasis).

As to the music, it’s not especially impressive. The first CD “Poke It With A Stick” is the raw material – the “exploration” as Brandtsegg calls it – as the players try and generate their new sounds. The processing is very noticeable, for sure; it’s unclear how much it’s adding to these rather lacklustre, and in places quite corny performances; the vocal elements are embarrassing, like amateurish attempts at scat singing. I don’t hear any exceptional improvisation going on, nor much in the way of unusual sound production. The second set is all about the assembly, the editing; hence the soubriquet ‘Joining The Bots’. This might be regarded as the more successful half of the set, assuming you like your music to be full of collision edits, illogical juxtapositions, and yet more processing. But little coherent music is produced. To me, it reveals the essential chaos at the heart of this “cross-adaptive processing” method; it’s a clear case where the technology has got in the way of the music, rather than helped to advance it. I regret having spent so much effort in the examination of this record. From 26th February 2019.