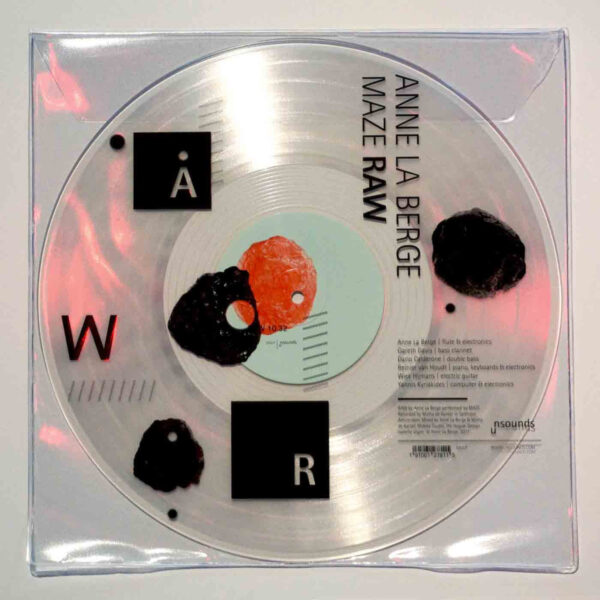 Anne La Berge is the flautist in the MAZE Ensemble, noted here by Stuart Marshall on the album (Amsterdam) Memory Space. For that, they performed the music of Alvin Lucier in a radical experiment which, we think, involved all the musicians wearing headphones in such ways that they had to choose between concentrating on internal and external stimuli. As Stuart wrote, it was an “unusual interplay in which highly subjective personal dimensions are invoked by each performer.”

On today’s offering, Raw (UNSOUNDS 59ULP), we have the MAZE players again, the same lineup in fact – Dario Calderone, Gareth Davis, Wiek Hijmans and Yannis Kyriakides – lacking only pianist Reinier van Houdt. It’s a composition by Anne La Berge, and again an unorthodox set-up which pushes the musicians into unusual interplay. She used computer technology. She devised a MAX patch which allowed each player to vary the direction of the music; by touching a tablet, they could determine which musician would play with who, or what “type” of music should be played. They could also trigger the playback of a pre-recorded portion of spoken word content. While I’m not clear on the exact details of the rules of this game, it seems that it was up to each musician to make these decisions about when to touch and when not to touch. Me, I’d have hated it; I think I would have been afraid to even go near the screen! But then I’m not a musician. I suppose it takes a certain courage and self-confidence to even participate in an action like this, showing one is prepared to surrender one’s input to the chance intervention of another, in a dynamic live situation. Fluid, in fact. La Berge liked the “randomly generated choices” aspect of her plan, as any good post-Cagean should, but she also liked the idea of encouraging the collaboration and the creation of a work “in real time”. At this point you may think she has simply re-invented the basis of free improvisation. But they said the same about Stockhausen, with his Aus Den Sieben Tagen experiments. In any case, there was some musical material for the players to perform on Raw, it’s just that was it “unfinished”. Some assembly required, might be one way of putting it.

“Raw” is about the last adjective I would have reached for when hearing the music on the disc. It’s certainly not raw in the sense of feeling like primitive or naive music – the players are obviously proficient, skilled, technically able. They make it seem easy. I suppose it might mean raw as in “uncooked”, as if what we’re witnessing unfold is a team of chefs getting to work on raw eggs, meat, and vegetables, and slowly “cooking” them before our eyes. So the idea is that, through the collective effort, a total musical work emerges. Does it? I would characterise the music on Raw as quite fragmented, almost pointillist – a succession of small gestures, sounds, and events, some of which are quite interesting – but the completed picture, if indeed there is one, is something I’m not yet able to see. It doesn’t progress much beyond the fragments, and you will wait in vain for the work to coalesce into anything so vulgar or conventional as a crescendo or satisfying resolution. The elaborate method proposed by La Berge doesn’t really liberate the musicians, and they end up just getting in each other’s way as they attempt to jump through the hoops and leap over the hurdles she has set up.

On the other hand, I suppose it’s that very process that’s important, and as processes go this one can yield moments where notes, timbres, and sounds sometimes manage to coincide successfully. Superficially, it’s a nice mix of acoustic and electronic sounds, and (again due to Anne La Berge’s stringent plan, it must be said) the record manages to avoid becoming the sort of syrupy drone that can sometimes result when lesser musicians start picking up electronic devices of any sort. The only bit that jars for me is the spoken-word fragments, recordings of people making rather commonplace observations about things. But Anne Le Berge is no stranger to using pre-recorded texts in her work, as we noted when hearing her Speak CD for New World Records. Pressed in clear vinyl and issued in a clear sleeve; Isabelle Vigier did the brilliant design. From 2nd May 2017.