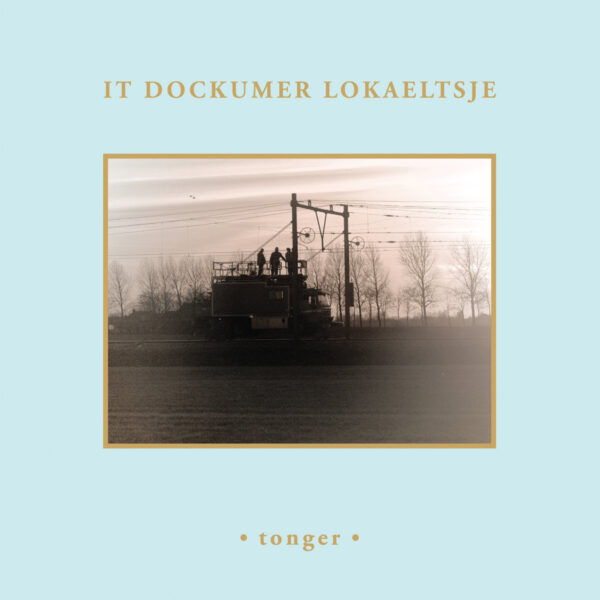 Very much in the vein of their then contemporaries; the Vale of Evesham’s Dancing Did and the Grand Duchy of Mancunia’s M.E. Smith, Frisian post-punkers It Dockumer Lokaeltsje on their “Wil Met U Neuken” and “Moddergat” elpees, concocted an alternate and supernaturally-themed mythology around their Leeuwarden home. A place in which the devil, various ghostly apparitions and numerous mummies disported themselves about the locale in ways mysterious and macabre.

Now after a near two decade long hiatus, which in the interim, saw the trio of Sytse J. van Essen (guitar), Fritz de Jong and Peter Sijbenga (drums/vox and bass/vox respectively), heading off into the sunset with Lul (albums on Eksakt), Deinium and Dish Hunt, they’re back, older and wiser with “Tonger”. This being a rather economical Frisian word for both thunder and lightning. Part of I.D.L.’s original maxim was that “It had to be different. It had to be short. And it had to be in Frisian.” Not quite as snappy as the Desperate Bikes’ “It was easy. It was cheap. Go and do it!”… but the trio’s three-point plan is still in full effect with these eighteen short, sharp shocks. In fact I don’t think that any of these tracks nudge past the two minute mark!

Though his attention was more focused on the ‘shambling’ bands of that time, I can certainly see why D.J. John Peel was such a keen fan of their oeuvre. Precision stop/start rhythms a la Delta 5 or Gang of Four’s debut, angry hornet fuzztones and tinny drum tattoos on the drunken, lurching “Alde Stront” and the frantic “Brutsen Klau” suggest that while most band reunions eventually turn out to be the very dampest of damp squibs in Squibtown, the charmingly prickly and irascible “Tonger” remains a worthy exception to the rule.