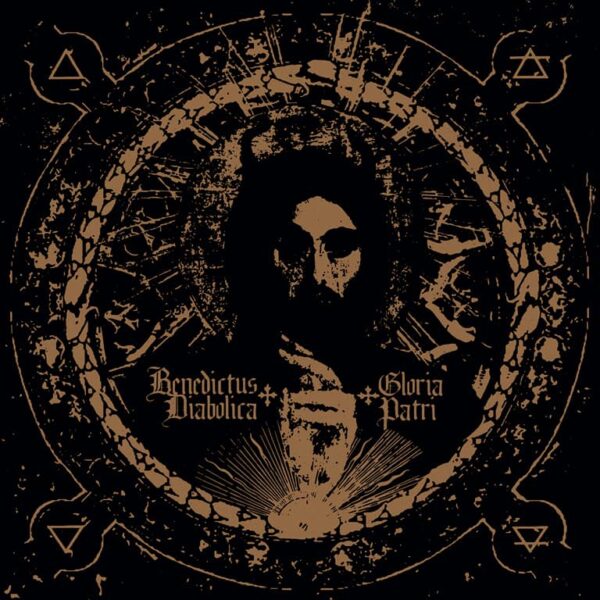 With three members spread across Belgium, France and Switzerland, the wonder is that Ancient Moon can get together (if they do) to record work. They have been building up their studio reputation steadily if slowly, releasing a second album in 2019 (four years after their first, “Vvlture”). Consisting of a pair of tracks of not-quite equal length, “Benedictus Diabolica, Gloria Patri” creates a sinister underground sound universe with atmosphere and layers of music and vocals. Grinding tremolo guitars, thrumming bass and machine-gunning blast-beat percussion provide the power behind the groaning monster demon vocals, and the use of echo on the voices and some of the instruments (especially keyboards) creates an evil cavernous ambience in which unholy rituals and hymns praising Satan are conducted. The rapid-fire nature of the tremolo guitars and drumming gives a streaming, flowing quality to the music that enables it to ebb and flow like waves on a beach, adding to its power.

Part 1 is structurally not a very complex piece: the music revolves around a riff and sticks to it more or less. It’s the reverence with which the Ancient Moon men build up the ambience by adding keyboard wash and the multi-tracked vocals which include deep sonorous throat singing, that make the piece the epic blasphemous soundtrack it is. The punishing pace builds up the intensity and the anticipation of something glorious that will soon happen. There are many moments of sheer deranged delirium when some of the keyboards go a bit off-key and insist on going round and round in circles, in a demon-possessed trance. There may be other moments where the music just coasts along or leaves listeners floating in black murky silence for a while but the focus remains obsessively single-minded.

Part 2 starts a bit slower, with showers of corrosive tremolo guitar raining down on listeners’ heads, and has even more of a deep occult feel. When the music erupts into raw BM aggression, it has an air of complete insanity as though the ritual being enacted has robbed its participants of all conscious thinking and what is left is their deep desires and hatreds. Now reptilian vocals – obviously there was some physical and spiritual transformation at the end of the first track – dominate the music in amongst the berserk guitaring and runaway drumming. As with Part 1, the music pulls back and allows the dark ambience to fill the ritual participants’ minds with thrumming hand-drumming rhythms, inaudible chants and heavy breathing and sighing. When at last the music resumes, it settles into a melodic if sedate pace and continues to its goal.

The band’s main achievement is in creating, building up and maintaining a consistent and credible sonic world of unholy sights and ceremonies performed by subterranean creatures (who dare not reveal themselves in sunlight, lest they be burnt to a crisp) to revere their demon god. Raw brutal and bestial aggression and occasional derangement are balanced by a restrained ethereal atmosphere and the reverence with which the worshippers conduct their evil rituals. While perhaps the later moments of Part 2 may be a bit drawn out and the band treads a fine line between being appropriately dramatic and being cartoonish, on the whole this album paints a very rich soundscape in which listeners’ imaginations can fly and you really can see hooded figures in deep catacombs hailing a statue of Baphomet and bringing sacrificial victims to the blood-soaked altar on the film projector screens behind your eyelids.